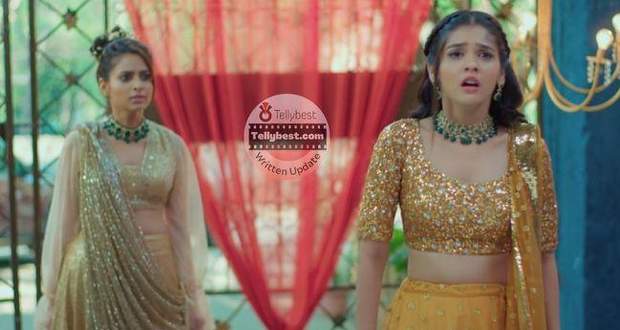 Everyone becomes happy and tells AbhiRa that Neil has been eagerly waiting to tell the news to them in person.

Akshara and Abhimanyu are shocked to hear the news while Aarohi wonders about their reaction.

She is afraid Abhimanyu might tell about her blackmail and asks them hesitantly how they feel about her being pregnant.

Akshara tells her that her happiness is double as she is going to be Maasi and Tayi both.

Afterwards, Akshara wards off the evil eye from Aarohi on Swarna and Manjari’s insistence.

Manjari tells Aarohi to grant a gift to Akshara as she has to ward off the evil eye first.

Meanwhile, Akshara tells Aarohi that she knows that she is scared about what she might tell her family.

However, she assures her that she will do no such thing but Aarohi has to keep her condition a secret from the family.

Akshara also warns Aarohi to never again dare to use Abhimanyu or blackmail him in any way or else she will have to face the consequences for that.

Later, both families make plans to celebrate happiness by donating and distributing food to the poor.

All this time, Abhimanyu has eyes only for Akshara and feels the pain that she must be going through.

After a while, Akshara goes to her room to cry her heart out while Aarohi stops Abhimanyu and thanks him for not exposing her to family.

Abhimanyu tells her that her pregnancy has given her another chance so she should make the most of it.

He also warns her off Akshara saying he will burn her world to ashes if she dares to hurt Akshara ever again.

After a while, Aarohi announces to everyone that she is returning Abhimanyu’s bike to him back to celebrate the occasion and hands over the keys to him.

Later, Manjari and Swarna decide to have one ritual today and ask Abhimanyu to bring Akshara down as she will be participating in the ritual with Aarohi so that she can get pregnant soon.

Meanwhile, Abhimanyu comes to his room to find Akshara sprawled on the bed looking forlorn.

He comes to her and lies down beside her when Akshara tells him that she is happy for Aarohi but she finds it difficult to forgive her for blackmailing him.

Abhimanyu tells her that he has warned Aarohi that he will not have any problem with her as long as she does not hurt Akshara.

Akshara also tells the same to Abhimanyu and hugs him tightly thinking about the loss they have suffered.

On the other hand, Manjari and Swarna share their experience of becoming first-time mothers and make plans to enjoy this happiness together.

They also pray for Abhimanyu and Akshara to give them happy news soon.

Later, Abhimanyu tells Akshara to not go down as they are waiting to perform a ritual where she will have to sit with Aarohi so that she can get the blessing to become pregnant soon.