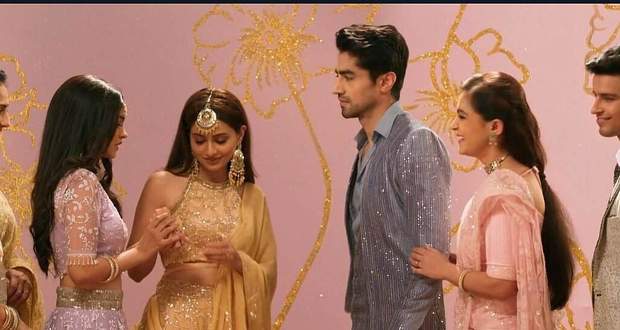 Today's Yeh Rishta Kya Kehlata Hai (YRKKH) 5 January 2022 episode starts with Akshara’s dance performance, Abhimanyu also joins her along with other family members as they groove to the music dancing in joy.

Akshara and Abhimanyu, both leave the dance and cry in pain feeling their heartache on being separated from each other.

Neil tries to convince Akshara but she tells him to not talk about it.

After some moment, the ring ceremony starts. Shefali informs the others that Abhimanyu’s ring is missing.

Akshara searches and discovers the ring in the box, making Abhimanyu clench his teeth being upset.

Abhimanyu puts the ring in Arohi’s finger but Arohi and others discover an injury in Abhimanyu’s ring finger while putting the ring.

Manjari asks how he got that injury; Abhimanyu convinces her that it was a minor injury.

Arohi puts the ring on Abhimanyu’s other hand, the ring ceremony concludes.

Later, Akshara comes to Abhimanyu with Jamun leaves to nurse his wound.

She bandages his wound even though Abhimanyu resists her from doing so, he tells her no herbs can cure the pain of his heart.

He asks if she has any solution for the pain of heartbreak that he is going through.

Akshara straightaway tells him to marry Arohi and forget about them.

Akshara walks away from Abhimanyu and cries which Kairav notices while passing from there.

Upcoming YRKKH episode updates: Neil and Kairav walk to their respective families to reveal Akshara and Abhimanyu's hidden feelings, Abhimanyu and Akshara try to stop them.