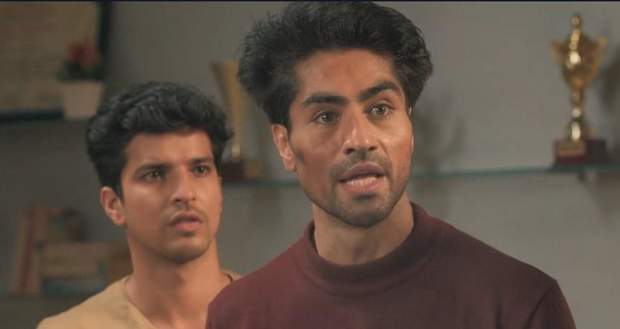 Just then Abhimanyu comes out heroically carrying Akshara on his shoulder and is immediately taken to ICU.

Both Akshara and Abhimanyu are unconscious and are being treated by Mahima and Anand respectively.

Anand calls on Abhimanyu to wake up as his being unconscious is not a good sign.

All the family members are worried about Abhimanyu and Akshara.

Shefali tells Kairav that instead of panicking it is better to pray.

Kairav feels ashamed of his past behaviour after knowing that Abhimanyu has risked his life to save Akshara.

Manish prays for Abhimanyu saying he is a very important person who has saved many lives.

Meanwhile, Shefali wonders about Harshvardhan who is nowhere to be found.

Harshavardhan is crying at the burnt wing at the loss of his years of hard work.

Abhimanyu and Akshara come back to consciousness asking for each other and then relapse back.

Later, Anand tells Manjari that Abhimanyu is in critical condition and will need to come back to consciousness or else he will be very difficult to save.

Manjari is holding hope with a thread while Anand tells everyone that if anything happens to Abhimanyu then he will leave his practice forever.

Kairav expresses his guilt at saying Harsh words to Abhimanyu the other day and regrets his behaviour.

Just then Akshara escapes her room worrying about Abhimanyu and asks to be taken to Abhimanyu who is serious.

Parth and Anand agree to let Akshara be with Abhimanyu as she might trigger Abhimanyu to come back to consciousness.

Akshara tries to wake Abhimanyu by saying that she is her patient who needs his medical condition. She later scolds him and threatens him to be awake.

Akshara’s insistence worked and Abhimanyu wakes up thinking of Akshara.

Seeing Akshara crying on his chest he puts his hand on her head.

A wave of happiness surrounds everyone and they all rejoices when Abhimanyu wakes up.

Anand tells Abhimanyu and Akshara that together they have saved all the patients in the wing and he is very proud of them.

© Copyright tellybest.com, 2022, 2023. All Rights Reserved. Unauthorized use and/or duplication of any material from tellybest.com without written permission is strictly prohibited.
Cached Saved on: Tuesday 22nd of November 2022 03:16:31 AMCached Disp on: Thursday 1st of December 2022 10:18:20 PM