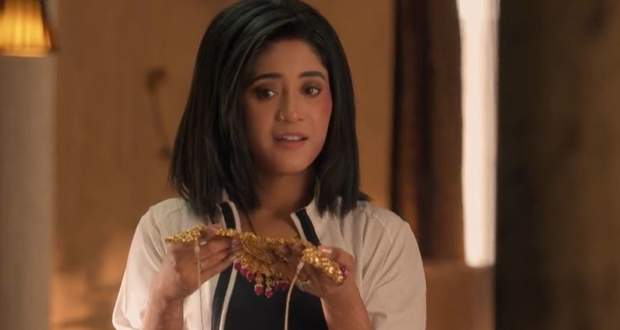 Today's Yeh Rishta Kya Kehlata Hai (YRKKH) 5 June 2021 episode starts with Sirat getting worried for Kartik as Kairav informs her that he is not feeling well.

Meanwhile, Kairav tells Sirat that he got worried about Kartik's health. He had no choice so he called her for help.

Later, the situation gets settled as Sirat tries to cheer Kairav and tells him not to worry about anything.

The next day, Kalavati invites Sirat for her post-marriage rituals.

At the same time, Sirat finds an expensive necklace on her table she thinks that Kartik's family must have given it to her as a gift.

On the other hand, Swarna gets worried as Gayatri tells her that she isn't finding the ancestral necklace that was to be given to Sirat after her and Kartik's marriage.

Later, Sirat and Ranvir come for their post-marriage rituals, and the Goenka's get surprised to see Sirat wearing the ancestral necklace but they get hesitant to ask her to give it back to them as she gets married to Ranvir.

In the twist of events, Sirat learns that the necklace doesn't belong to her and removes it to give it back to Swarna.

Ranvir sees Kartik wearing a necklace to Sirat and gets confused thinking that why didn't Sirat gave the necklace back to him.

© Copyright tellybest.com, 2020, 2021. All Rights Reserved. Unauthorized use and/or duplication of any material from tellybest.com without written permission is strictly prohibited.
Cached Saved on: Sunday 2nd of October 2022 04:46:29 AMCached Disp on: Friday 7th of October 2022 01:53:07 PM