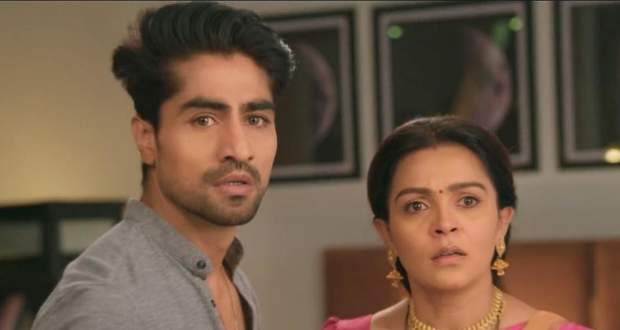 At the same time, Harshvardhan arrives there and taunts Abhimanyu that he is not even married to Akshara yet but has devoted himself wholly to her family.

Being hurt at his ego, Harshvardhan uninvites himself from Abhi's wedding which Abhi repeats too after some time.

With a rise in temper, Abhimanyu counters that Harshvardhan has not done anything without a selfish motive, so why would he come to his wedding.

Further on, Suhasini and Swarna call Manjiri to invite her to their house to discuss the wedding rituals and events.

Manjiri agrees to meet but the sadness in her voice does not go unnoticed by Swarna.

Aarohi hears Suhasini hoping for the betterment of things and understands the context of her words which gets her emotional.

When Kairav sees Aarohi crying, he asks her the reason for being sad.

Aarohi shares her feelings that everybody has so easily forgotten her pain when she was left alone on the aisle on her wedding day and is celebrating Akshara's happiness.

Kairav tells Aarohi that nobody has forgotten her pain but they have learned to move on.

On the other hand, Harshvardhan calls Akshara to the hospital to give her the joining letter and accuses her of separating him from his son.

Harshvardhan says that to avenge him for Manish's insult, Akshara has made Abhi uninvite him from the wedding.

Later on, Akshara goes to Abhi's cabin where she asks him to sort out the matter with his father and invite him to their wedding.

Abhimanyu refuses at first hand but Akshara argues that she doesn't want to lose another father figure in her life.

Abhimanyu tries to tell his family's past story to Akshara but she refuses to listen.

The two of them get into a conflict that remains unresolved.