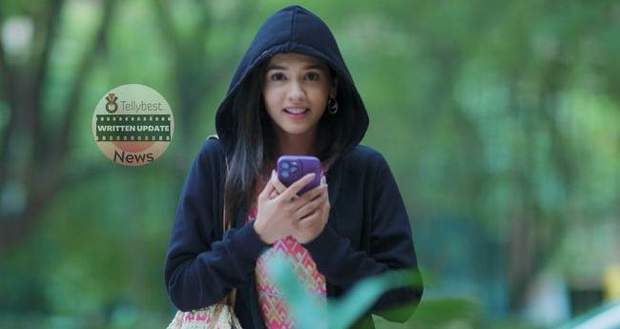 Meanwhile, Akshara is watching the interviews of other contestants and feels nostalgic about a similar interview she had given where Abhimanyu was with her.

On the other hand, Abhimanyu tells the Goenkas he cannot tolerate insult to Manjari and tells them to apologise to her immediately and finish this matter here.

Suhasini swears on Akshara that Akhilesh has not splashed mud on Manjari.

However, Akhilesh tells Abhimanyu to apologise for what he and his family had done and he will definitely return the favour.

Seeing things getting out of hand, Abhimanyu tells his family to leave and not drag the matter.

Seeing Abhimanyu leave instigates Manish and he taunts Abhimanyu saying that that is what he does best, run and hide from the problem.

Harshvardhan accuses Akshara and Kairav of running away and leaving them behind for they are the real cowards.

In the meantime, seeing Maaya panic Akshara sings a song for her to calm her down and counsels her to fight her fears.

On the other hand, Manish accuses Abhimanyu of being a bad husband and not loving Akshara enough to let hatred win over his love for Akshara.

Meanwhile, Akshara tells Maya to close her eyes and think about something that matters to her most to get the strength to fight for it.

Elsewhere, Manish is questioning Abhimanyu for not trying to search for Akshara while Abhimanyu tells him that he will not understand what he has done or not nor does he want to explain to him.

In the meantime, Maaya suggests wearing a mask while lip-singing the song just like they did at the temple to alleviate her fears.

Meanwhile, Shivansh is being unmanageable by Parth and messages Shefali to hurry.

Later, Manish grabs Abhimanyu's hand and takes him out of the house.

Abhimanyu begins to smile remembering the similar moments in the past and tells Manish that his hold has weakened with time.

Wiping his tears he tells Manish to not take so much stress that it takes a toll on his health and leaves.

In the meantime, Dr Kunal turns on Maya's mask as concern for singers who never got this chance.

At home, Mahima looks pleased to see Abhimanyu home while he ignores her and goes to his room after putting on his headphone.

Mahima announces with glee that Goenkas received the call from Mauritius.

In his room, Abhimanyu throws everything away and shouts in the air that he is not running from anything neither from his circumstances nor from Akshara’s betrayal. He is standing exactly where Akshara has left him.

He tells Akshara that she will have to meet him once to get his answers from her.

© Copyright tellybest.com, 2020, 2021. All Rights Reserved. Unauthorized use and/or duplication of any material from tellybest.com without written permission is strictly prohibited.
Cached Saved on: Saturday 1st of October 2022 09:37:58 PMCached Disp on: Monday 3rd of October 2022 07:35:51 PM