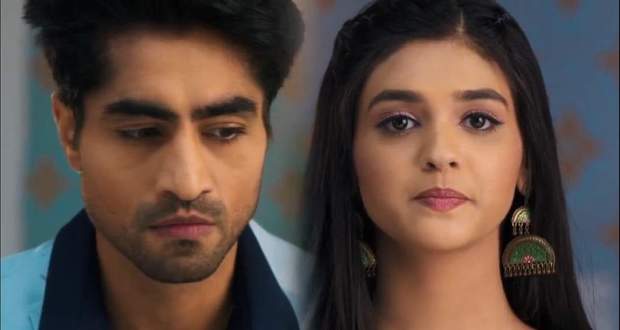 Today's Yeh Rishta Kya Kehlata Hai (YRKKH) 6 December 2021 episode starts with Akshara announcing that she was with Abhimanyu the whole time when Ruby came and left his cabin and alleges Ruby of lying about the whole incident.
When the Jury asks for evidence, Akshara reveals that she has the whole thing recorded on her phone that will reveal the truth.
Akshara threatens Ruby to make the video viral which frightens Ruby.
Ruby stops Akshara and confesses that she was lying to frame Abhimanyu.
On Ruby’s confession, Akshara reveals that she doesn’t have any video recordings and did all the drama only to make Ruby confess.
Ruby’s dad tries to threaten Akshara for what she did but Abhimanyu stops him.
Ruby apologizes to Abhimanyu and everyone for charging false allegations.
The jury thanks Akshara for her bravery and dismisses the charges declaring Abhimanyu innocent.
Abhimanyu asks the jury to not mention Akshara’s name anywhere in the public statements.
Before Abhimanyu can talk to Akshara, she leaves making him sad.
Akshara comes out and sighs in relief as Abhimanyu was safe now and the charges were dismissed. Kairav tells her to wait and leaves to bring something for Akshara to drink.
A few minutes later, Abhimanyu and Akshara come face to face. Akshara walks away from Abhimanyu but he follows her.
Akshara accidentally slips but Abhimanyu catches her before she falls. Arohi sees them together and was about to lash out at Akshara but Abhimanyu stops her.
Abhimanyu asks Akshara the reason for saving him and Akshara replies that she would have come even if it was any other person. This makes Abhimanyu angry.
Akshara leaves from there.

© Copyright tellybest.com, 2020, 2021. All Rights Reserved. Unauthorized use and/or duplication of any material from tellybest.com without written permission is strictly prohibited.
Cached Saved on: Wednesday 19th of January 2022 12:54:12 PM