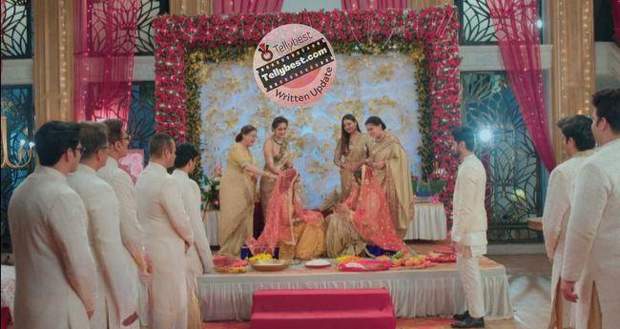 Today's Yeh Rishta Kya Kehlata Hai (YRKKH) 6th December 2022 episode starts with Abhimanyu telling Akshara that everyone is waiting for her downstairs so that she can get the blessing to become pregnant soon.

Akshara feels scared and hugs him while he tells her to stay put while he handles everything downstairs.

However, Akshara tells him that although the veneration is for Aarohi but she will get blessed with her too.

She tells him to not take away her hope and devotion which is the most powerful thing in the world.

Akshara convinces him to let her come down with him so she can get the blessings together.

Meanwhile, Aarohi comes to Manish asking him to forgive her for the sake of her child who has no fault in all this.

Hearing that, Manish hugs her and invites Neil to join in the hug too.

Later, Manish observes Akshara and Abhimanyu’s sad faces and wonders what can be wrong with them.

After the ritual is over, all the woman comes one by one to bless Aarohi and then wishes Akshara good luck to get pregnant soon.

Abhimanyu sees lines of pain in Akshara's expression and hopes to get this over and done.

However, seeing the blessings go on and on, Abhimanyu tells Manjari to stop talking about their baby and tells her to focus on Neil and Aarohi.

Manjari looks aghast at the interruption while Harshvardhan also berates Abhimanyu for overreacting.

Abhimanyu ignores him and tells him to not interfere while he is talking to his mother.

However, Manjari also asks him what has she said wrong that has him so agitated when Akshara has told her that she is ready to be a mother.

Manish also asks Abhimanyu what has been bothering him for a long time.

Swarna, Suhasini and Kairav also insist on Akshara to tell them what is the problem with her.

Akshara loses her control on hearing the love and worry in her family's voice and breaks into sobs.

Abhimanyu comes beside her and folds her into his arms while Manjari swears them to tell the truth.

Akshara turns to Manjari and tells her with tears that she will have problems in conceiving and her pregnancy can be fatal.

Telling them about the internal injuries that she suffered after the bike accident, she declares that Abhimanyu and she can never become parents again.

Manjari and other looks shocked at the news and tears start streaming down everyone’s cheek to hear the devastating news.

The happy atmosphere turns gloomy when everyone comes to them and hugs them for bearing the burden alone.

Akshara feels overwhelmed by her family’s sympathy and leaves telling them she needs to be alone for some time.

Afterwards, Manjari hugs Abhimanyu and tells him that she should have shared the burden of this news with her.

She tells him that she is strong enough to handle these things and would have comforted him by sharing their grief.

Harshvardhan also comes to Abhimanyu wiping his tears with his hankey and looking for words of comfort.

However, Abhimanyu understands his feelings and thanks him for his kindness and goes to Akshara.

Meanwhile, Manish tells him to look after himself as well while caring for Akshara.

Later, Abhimanyu comes to his room to find Akshara shrouded in a bedcover and recalls how he use to hide under it when things got tough in the real world.

© Copyright tellybest.com, 2022, 2023. All Rights Reserved. Unauthorized use and/or duplication of any material from tellybest.com without written permission is strictly prohibited.
Cached Saved on: Wednesday 25th of January 2023 06:11:27 PMCached Disp on: Wednesday 1st of February 2023 08:28:45 PM