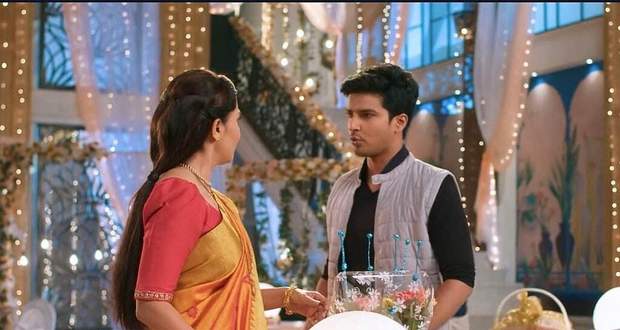 Today's Yeh Rishta Kya Kehlata Hai (YRKKH) 6 January 2022 episode starts with the Goenkas leaving the house of the Birlas after the completion of the engagement function.

Kairav notices Akshara staring at Abhimanyu and asks her to leave with him.

Later, both Abhimanyu and Akshara cry in their rooms. A sensual performance starts with them dancing and showing their pain of separation.

Kairav interrupts Akshara by giving her milk and tells her that he knows how she is hurting herself by giving up her love.

Kairav states that he will tell the truth to the other family members and proceeds to talk to them with Akshara running after to stop him.

At the same time, Neil shows Abhimanyu the video of him banging his hand intentionally and injuring his finger.

Neil tells him that he will tell Manjari about Abhimanyu’s real feelings and walks away, Abhimanyu rushes to stop him.

Both Kairav and Neil walk to the adults to reveal the truth but get interrupted due to some interferences, Abhimanyu and Akshara convince them to not tell anyone about the truth.

Kairav agrees to give in but Neil determines to stop his brother’s marriage with Arohi.

The next day, Arohi daydreams while holding her engagement ring and gets scolded by Mahima for not focusing.

Meanwhile, Akshara sings for a patient while Abhimanyu checks him, Abhimanyu pretends to not see Akshara and ignores her.

Throughout the day, Abhimanyu doesn’t pay any attention to Akshara at all, Akshara realizes and gets upset.

Abhimanyu states that he has become a new Abhimanyu, the type of person that Akshara wanted him to become.

Both Abhimanyu and Akshara shed tears in heartbreak.

Upcoming YRKKH episode updates: Abhimanyu asks Akshara to not call him Abhi, Manjari watches the video of Abhimanyu hurting his finger and decides to confront him about the truth.

© Copyright tellybest.com, 2020, 2021. All Rights Reserved. Unauthorized use and/or duplication of any material from tellybest.com without written permission is strictly prohibited.
Cached Saved on: Thursday 20th of January 2022 12:29:46 PMCached Disp on: Friday 21st of January 2022 05:45:32 PM