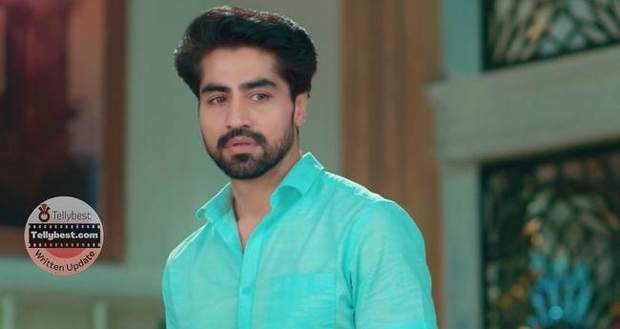 Meanwhile, Abhimanyu is rescuing a patient in a medical camp and decides to perform surgery on the spot.

Aarohi tries to stop him saying it will not be safe to do surgery in the open.

However, Abhimanyu tells her that it is important to save the patient's life.

Meanwhile, Manjari comes to Ruhi with medicine and a milk glass.

Ruhi dips the thermometer in hot milk raising the temperature to 104 F.

Meanwhile, Abhimanyu performs the surgery successfully and asks Dr Rohan to stitch him up.

In the meantime, Manjari calls Abhimanyu to inform him about Ruhi’s condition.

Elsewhere, interns are drooling to see Abhimanyu which Aarohi sees and chastises them.

Aarohi tells Abhimanyu that Ruhi is playing a practical joke on him but Abhimanyu tells her that her jokes are equally important to him.

After a while, Abhimanyu arrives home trying to appease Ruhi and dances to make her happy.

Afterwards, Aarohii also comes home and catches her in her joke.

Ruhi jumps up and down on hearing about the kites and climbs Abhimanyu back to go upstairs.

After a while, Abhimanyu and Ruhi are preparing their kites while Abhimanyu tells her that despite their excellent handwriting everyone in the family has to become a doctor.

Later, Parth comes talking about corporate talks on the phone and tells Manjari sarcastically that Shefali must be standing in front of her mirror with her makeup.

Just then Shefali appears talking on the phone with Shivansh.

Abhimanyu takes the phone from Shefali and Ruhi takes it from him to tell Shivansh about her thermometer trick so he can come home too.

After a while, Aarohi comes with the medicine for Manjari and coffee for Parth and asks Anand why his sugar is skyrocketing.

As everyone laughs at Ruhi’s antics, Manish, Swarna and Suhasini also join them and shower their love on Ruhi.

Manish asks Abhimanyu how is he and tells him that he asks him that every time because he never asks himself this question.

After some time, Ruhi shows Abhimanyu her kite where she has written to be loved by his poppy the most.

Abhimanyu tells her emotively that there is no one in the world more precious to him than Ruhi.

On the other hand, Abhinav sings in the car and entertains foreign tourists.

The tourists talk about Makarsakranti and ask Abhinav why there is no kite flying here.

Abinav talks in broken English and tells the tourist that in mountain areas they celebrate differently.

He brings the tourist to his home and invites them to join them in celebration of Mage Sage which is Makarskranti in mountain regions.

However, he becomes shocked to see Abheer fighting with Golu who is the neighbour's child.

The tourist makes fun of Abhinav who was talking about peace and happiness.

Abhinav tries to sort out the fight and just then Akshara’s stern voice is heard in the background.

Abhinav looks flummoxed while Akshara scolds Abheer for getting beaten up every day by Golu.

Abhinav offers to complain to his mother instead of fighting.

Akshara however, becomes nostalgic and tells Abhinav that it is important to know how and when to fight or else people who are in the wrong still rule them.

Just then Golu’s mother comes to save her son but Akshara drags her away and tells her that let these boys sort the matter among themselves and learn the hard lessons of life.

Akshara once again tells Abheer to not leave Golu until he apologises.

Golu’s mother tells him to apologise which he obeys and gets free.

Akshara gives Golu and her mother a bottle of jams.

Later, Akshara tells Abhinav to sell the jam to the tourist and spins a tale to them.