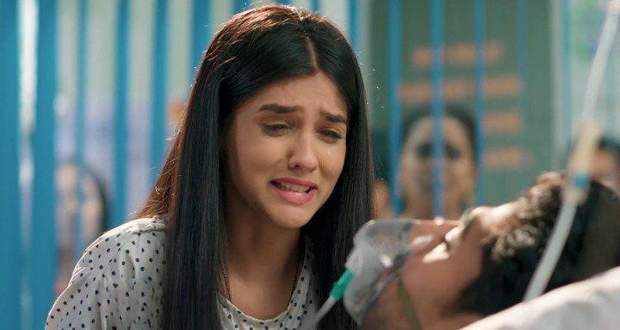 Today's Yeh Rishta Kya Kehlata Hai (YRKKH) 6th July 2022 episode starts with Anand telling everyone that he needs to do some more tests on Abhimanyu and only then he will discharge him.

Abhimanyu tells Anand that he will not get tested but Anand quietens him saying he is his doctor and what he will say will happen.

Everyone jokes with Abhimanyu while Swarna tells Manjari that they should start preparing for their Teej.

Afterwards, everyone leaves the room except Kairav.

Kairav apologises to Abhimanyu for misunderstanding him and tells him that he was wrong to interfere between them.

The next morning Akshara is getting ready to go to Abhimanyu.

On the other hand, Dr Rohan asks Abhimanyu to get done with an MRI test but Abhimanyu refuses it and tells him there is no need for it.

Later, Dr Rohan tells Abhimanyu that they all were scared yesterday for Abhimanyu.

Abhimanyu thanks Dr Rohan for being there and taking care of everything responsibly.

After a while, Akshara arrives at the hospital and finds Abhimanyu waiting for her.

Abhimanyu teases Akshara for coming to the hospital so decked up that many patients will have a heart attack while Akshara tells him that he should only worry for his own heart.

Afterwards, Abhimanyu tells Akshara that he feels like kissing her, making Akshara blush.

While Akshara was distracted, Abhimanyu plants a kiss on her cheeks.

Both Abhimanyu and Akshara are lost in the moment when Dr Rohan interrupts them.

Abhimanyu taunts Dr Rohan for spoiling a romantic moment while Dr Rohan tells him sheepishly that he needs his signature on the discharge papers.

Abhimanyu begins to sign but feels discomfort in his hand and wonders what could be the problem.

Many staff members come with cards and flowers to praise Abhimanyu and Akshara for saving so many lives.

At home, Akshara tells Abhimanyu that she had missed home while Abhimanyuu tells her the home missed her too.

As Abhimanyu and Akshara open the door they find everyone gathered to welcome them with flowers and smiles.

Manjari tells Akshara that last time she was not welcomed properly despite Abhimanyu’s efforts so Manjari thought to use the opportunity to rewrite her welcome in the house.

© Copyright tellybest.com, 2020, 2021. All Rights Reserved. Unauthorized use and/or duplication of any material from tellybest.com without written permission is strictly prohibited.
Cached Saved on: Saturday 1st of October 2022 11:27:11 PM