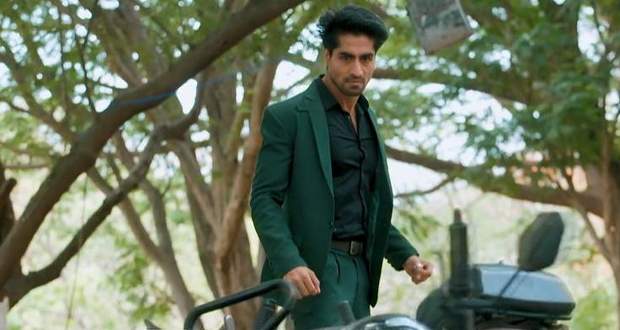 At the Birla house, Harshvardhan is waiting for everyone so that he can punish them.

Manjari is talking in her unconscious state.

Just then, Akshara and Neil, Shefali and Parth come in.

Harshvardhan is venting his anger on Neil for creating a scene at the hospital and is about to belt him when Akshara and later Manjari come in between.

Manjari accuses Akshara of telling everyone and tells her that she will never forgive her.

Akshara is shocked at the accusation while Harshvardhan gets confused at the drama.

Just then Abhimanyu also comes in and Harsh asks Abhimanyu to ask his beloved what had they been doing at the hospital.

Abhimanyu gets angry and tells Harshvardhan that Neil is his child.

Harshvardhan is shocked at the accusation while Abhimanyu shows him the report.

Harshvardhan denies being his father and claims that samples have mixed while Manjari tells him that Neil is his and Dr Avni’s child.

Meanwhile, Aarohi is enjoying creating a problem for Abhimanyu thinking that he wants to sabotage her career.

In the meantime, Manjari tells Harshvardhan once again about Neil being his son while Neil asks her about the truth of his parentage.

Manjari tells everyone of a woman having an affair with a married man and a child is born who is not acceptable to the father or society.

She tells them that Avni informed her of Neil being in the adoption centre where she used to go to look after her but Abhimanyu’s insistence on adopting Neil brought him home.

Harshvardhan accuses Manjari of playing a game with him and betraying him with the truth while Manjari and Abhimanyu look at him complainingly.

Harshvardhan in his anger asks Manjari to leave the house and tells her to take Neil with her.

Abhimanyu gets angry and tells Harshvardhan that only he deserves to get out of the house.