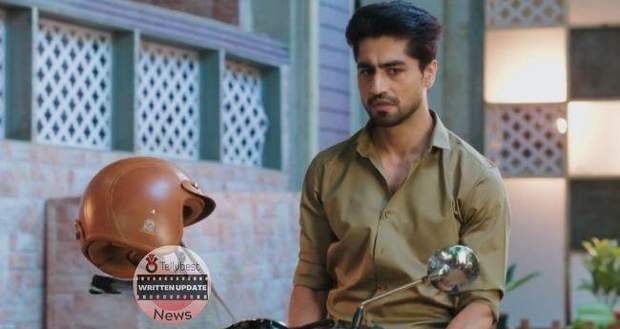 Today's Yeh Rishta Kya Kehlata Hai (YRKKH) 6th November 2022 episode starts with Akshara being in a confusion about what she should do with her decision regarding her and Abhimanyu’s marriage.

Akshara hugs her parents’ picture and asks them what she should do as she wants to be with Abhimanyu but is afraid of going through the same pain.

Meanwhile, Abhimanyu arranges the whole house according to Akshara’s taste in the hope that Akshara will answer with a yes.

Manjari watches Abhimanyu and feels bad for him as he is relentlessly waiting for Akshara’s answer while she is not replying.

Abhimanyu sends Akshara a voice message telling her that he is holding his breath for her decision.

Manjari wonders what is making Akshara think so much and calls Manish to ask him to guide Akshara a bit with her decision.

However, Manish tells Manjari that both Abhimanyu and Akshara are well-grown adults and know what decision they should take for themselves.

Mahima tells Abhimanyu that Akshara will not come back to him and he is hoping for the impossible.

Abhimanyu does not pay heed to Mahima’s words and leaves for the hospital.

Meanwhile, Akshara gets a call from Jaipur as someone from her Guruji’s foundation invites her to the singing event.

Akshara gets to know that the event starts the next day and starts packing which Kairav notices.

Kairav informs everyone about Akshara packing her things for Jaipur when Akshara comes down and announces that she has made her decision.

Manish tells Akshara that they are with her in whatever decision she takes.

Meanwhile, Manjari is worried about Abhimanyu’s condition as he is not eating or sleeping properly.

Abhimanyu comes back and decides to leave for the divorce hearing while everyone asks him to talk to Akshara once.

As Abhimanyu starts his bike to leave, he hears a crowd of people entering their house while dancing to a happy tune.

Abhimanyu asks them to stop their noise and informs them that they have come to the wrong address.

However, Akshara comes out of a palanquin in a bridal outfit shocking Abhimanyu.

Akshara starts dancing to “Bole Chudiya Bole Kangana” making Abhimanyu join her while the family members cheer for them.

Hugging Abhimanyu in her arms, Akshara tells him that instead of her answer, she came to him by herself.

Akshara tears up the divorce papers and announces the divorce is canceled between her and Abhimanyu.

© Copyright tellybest.com, 2022, 2023. All Rights Reserved. Unauthorized use and/or duplication of any material from tellybest.com without written permission is strictly prohibited.
Cached Saved on: Monday 21st of November 2022 04:28:50 AMCached Disp on: Tuesday 29th of November 2022 12:24:26 AM