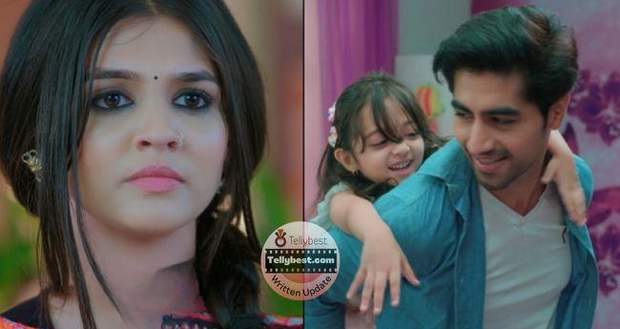 Today's Yeh Rishta Kya Kehlata Hai (YRKKH) 7th January 2023 episode starts with Ruhi asking Suhasini why is she not flying the kite while Suhasini tells her that she will do the umpiring. Suhasini tells Ruhi that today is the day for a new beginning.

Suhasini explains that every day is a new start and relationship needs denting painting from time to time to keep them fresh and looking new.

After a while, everyone makes a team while bantering and challenging each other to win.

Ruhi tells Abhimanyu that she wants to win today and Abhimanyu tells her that's what they will do then.

Later, Manish manages to cut Abhimanyu’s kite and Ruhi becomes sad as she had written a wish on her kite.

Abhimanyu asks Ruhi to shut his eyes and performs the risky jump to save the kite from falling which scares everyone.

However, Abhimanyu returns with the kite and tells Roohi that no matter how far the kite is, its thread should always be in hand else it goes so far away from sight.

After that Abhimanyu becomes invincible and wins the competition.

Afterwards, Birlas and Goenkas dance with each other and spends the day making merry.

Elsewhere, Akshara brings a new toy for Abheer who asks her why she tells her to fight, unlike other mothers.

Akshara tells him that she only wants him to learn how to fight not fight all the time.

Sharing her life experience, Akshara tells that they should always protect things from breaking as they can never be the same once they are broken.

Seeing Abheer’s blank face, Akshara tells him that soon he will learn everything and thank her one day for teaching him to fight.

Afterwards, Abheer and Abhinav run from Ashara when she demands them to sell her jam and later hug each other after falling asleep.

Meanwhile, Abhimanyu brings the sleeping Ruhi to her room while Aarohi makes her bed.

Later, Abhimanyu observes a mosquito bite on Ruhi and applies the mosquito repellent before leaving the room.

In his room, Abhimanyu comes back looking sad and forlorn and goes to sleep after a while.

The next morning, Akshara wards off the evil eye on seeing Abheer and Abhinav sleeping together.

Later, she thanks God for his bounties and goes to the Kitchen to start her day while calling Abhinav and Abheer to wake up.

Akshara has turned into a middle-class wife who is always worrying about saving money.

After a while, Abhinav comes to ask Akshara for a new paste tube but Akshara rolls the old tube some more to extract the paste.

Later, Abhinav and Abheer come running out of their room at Akshara’s stern voice.

Meanwhile, Abhimanyu prepares breakfast for Ruhi while talking on the phone about Ruhi’s friend's party.

Later, Ruhi butters Abhimanyu into combing her hair while Aarohi looks at them with love.

Meanwhile, Akshara instructs Abheer and Abhinav to sell the jams which make them leave at speed.

Neelam amma comments on their being scared of Akshara while Abhinav tells her that his wife is a lioness but changes her comment after seeing Akshara.

Later, Neelam amma asks Akshara why does she not sing like other village women while making jam.

Neelam’s casual comment freezes Akshara while she recalls her past.

© Copyright tellybest.com, 2022, 2023. All Rights Reserved. Unauthorized use and/or duplication of any material from tellybest.com without written permission is strictly prohibited.
Cached Saved on: Wednesday 25th of January 2023 10:31:36 AMCached Disp on: Monday 6th of February 2023 04:53:10 AM