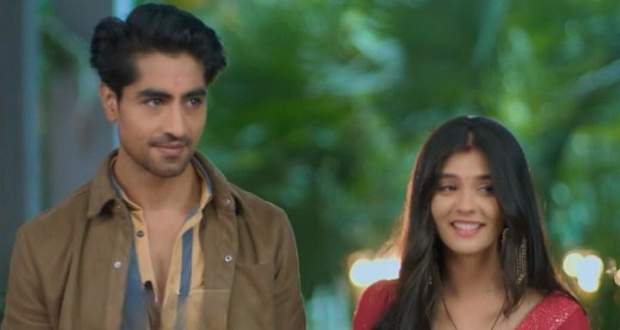 Today's Yeh Rishta Kya Kehlata Hai (YRKKH) 7th July 2022 episode starts with Anand telling Manjari that they should go as they have only come to welcome Akshara but they have a lot of work at the hospital.

Abhimanyu tells Anand that he will join them in a while.

Anand tells Abhimanyu that he will not come to the hospital until he gets well.

Just then Harshvardhan also comes down and tells them that he will also accompany them to help as a family member.

After a while, Swarna tells Akshara that her things for Teej are in the car and if it's okay with everyone then she will get it here.

Akshara assures her that there is no problem and that she will celebrate Teej and all other festivals now that she is married.

Meanwhile, Akshara comes to her room and finds it scattered with her things.

Abhimanyu tells her that here he scatters things when he misses her because the organised room tells him that she is not close by.

Akshara expresses sadness for not valuing the love they have while Abhimanyu tells her that they did not realise what they are doing.

Later, they confess love to each other. Just then Akshara remember the time for medicines.

Akshara hands over the water bottle to Abhimanyu but it slips his hand. Akshara thinks it was her mistake while Abhimanyu worries about his hand.

Later, Akshara kisses Abhimanyu to get the taste of medicine out while Abhimanyu tells her that his medicine tastes bitter as well.

Akshara covers her face like a first-day bride and comes to Abhimanyu.

Abhimanyu drags her on the bed and together they get lost in each other.

The next morning, Akshara wakes up before the alarm and goes to prepare for Teej.

Abhimanyu feels restless and wakes up too and follows Akshara to the dining room.

They are getting romantic with each other when Manjari comes in asking them their reason for being awake.

Abhimanyu tells her that he is helping Akshara eat the food that his in-laws have sent and asks her to join in.

Afterwards, all the Birlas come back home and join them in eating the food.

Mahima tries to keep Akshara from fasting but Akshara insists.

After a while, Harshvardhan asks for a cup of tea from Manjari and gives her many more instructions which makes Abhimanyu angry and he leaves his chair.