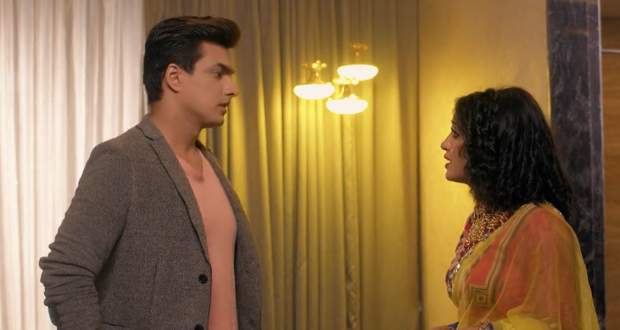 Today's Yeh Rishta Kya Kehlata Hai (YRKKH) 7 June 2021 episode starts with Ranvir getting upset with Sirat as he sees Kartik wearing the ancestral necklace that he asked her to return to Kartik.

Meanwhile, Sirat tries to console Ranvir by saying that she was trying to give the necklace back to Kartik but he didn't agree, and to keep the dignity of their friendship she didn't insist on Kartik and kept the necklace for herself.

Later, the Goenka's play a game but after some time Kartik gets upset and leaves.

Sirat follows him and sees that he is missing Naira.

She tries to persuade Kartik by saying that soon his loneliness will vanish away.

On the other hand, Narendranath tells someone over the call that he has no son which makes Ranvir's mother distressed and she falls off the stairs.

Further, Sirat and Ranvir perform their post-marriage rituals and enjoy.

Sirat loses the game and blames Kartik for it and as a repay she takes a promise from him to do whatever she asks for.

Sirat makes a bold move and asks Kartik to get married which makes everyone surprised.

To everyone's surprise, Kartik agrees with Sirat and promises her that he will get married.

Sirat tells everyone that she will find the ideal match for him.

Later, Ranvir learns about his mother admitted to the hospital.