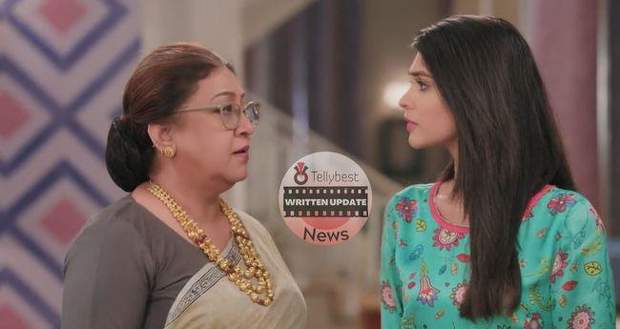 After the sound of dhol ends, Akshara looks at Abhimanyu teasingly and tries to lift him.

Manjari gets excited & tells Akshara she will be back with the Pooja Thali to welcome her while Mahima looks discomforted.

Abhimanyu picks Akshara up bridal style and lowers her down once they reach the entrance.

However, Manjari gets hurt after Akshara says she must talk to Abhimanyu once before entering the house.

Manjari's eyes follow them while Kairav delivers good news about AbhiRa to all the Goenka's.

Meanwhile, Aarohi sees both the lawyers fight about their clients not arriving on time.

Aarohi says she is just here to see the fallen faces of Akshara & Abhimanyu after their divorce.

On the other hand, Abhimanyu teases Akshu that his baarat was better than her doli.

He then asks her whether she feels love for him or not & Akshu says a definite yes.

Inside the Birla House, Mahima asks Manjari to be careful since Akshara might try to make Abhimanyu agree to her terms & conditions.

Meanwhile, Abhimanyu realises the importance of meaningful communication in a relationship.

Akshara tells Abhi she has something to share & she reveals feeling anxious about this second chance.

Akshara reveals this time she wants their trust to be more than love as their love never faded for each other.

Tears well up in Abhi's eyes as Akshara says she saw someone's bike fall outside her house and thought it was Abhimanyu.

Telling Abhi what is the point of being scared of the person you love so much, Akshara wishes a happy second chance to Abhimanyu who does the same.

Abhimanyu says he will be there for his Akshu always and calls out to Manjari, saying the dulhan (bride) is ready.

Manjari welcomes both of them with a smile as Akshara dips her palms in the Haldi paste and presses the impressions outside the Birla House.

With a teasing smirk, Abhimanyu asks Manjari if he can also do this since this is his second start in life too.

Mahima watches them in jealousy while AbhiRa becomes stronger than ever.

© Copyright tellybest.com, 2022, 2023. All Rights Reserved. Unauthorized use and/or duplication of any material from tellybest.com without written permission is strictly prohibited.
Cached Saved on: Monday 21st of November 2022 01:11:36 AMCached Disp on: Tuesday 29th of November 2022 12:52:36 AM