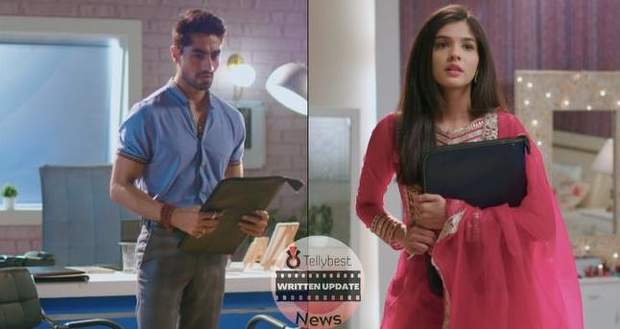 Today's Yeh Rishta Kya Kehlata Hai (YRKKH) 7th October 2022 episode starts with the counsellor telling Akshara that her husband is not willing to take the divorce and she gives Akshara another date.

Meanwhile, Harshvardhan and Manish are waiting outside the courtroom.

Harshvardhan worriedly discusses Abhimanyu and Akshara’s decision to divorce and says this decision is wrong and both the children should think about this some more.

However, Manish is filled with angst and does not agree with Harshvardhan.

He tells him that it is all Abhimanyu’s fault and that his lack of trust shows he does not deserve Akshara.

After a while, Akshara comes out of the counsellor's office looking for Abhimanyu and finds him sleeping in a standing position.

Akshara feels pity for Abhimanyu and stops him from falling.

However, Akshara taunts Abhimanyu for being absent and getting another court date.

In the meantime, Abhimanyu sees Akshara’s earring on the floor and fights to pick it up.

At home, Suhasini, Swarna, Kairav, and Vansh are all waiting for Akshara and Manish tells them that the date has been postponed due to Abhimanyu's sleep.

Kairav becomes hopeful that Abhimanyu might not want the divorce but Akshara sternly stops him.

Afterward, Akshara asks for a cup of tea while Kairav goes to get it.

As Akshara takes a sip, Vansh gets a call from the composer who rejected the video saying Akshara is using Maya’s voice and calls it fraud.

Akshara goes into a state of shock, realising that her identity is lost.

She shivers with fear at the realization and becomes dejected.

In the meantime, Parth is doing auditions for the music therapist but Abhimanyu rejects them.

Later, Parth taunts Abhimanyu for searching for Akshara’s voice in every singer.

On the other hand, Swarna and Vansh suggest that Akshara should do live shows so that people find out that Maya’s voice is Akshara's voice.

Meanwhile, Akshara decides to take back her identity and everything she has lost.

At the hospital, Anand is frustrated at lots of paperwork while Mahima assures him that she will get everything back with interest.

Meanwhile, Akshara is searching for jobs and comes across Birla hospital advertisements.

Later, she finds a Garba Night gig and decides to start her journey with this event to get back her voice.

Elsewhere, Nishtha asks Abhimanyu to take her to the Dandiya nights as the energy of the family is very low.

Abhimanyu apologizes to Nishtha and agrees to take her there.

© Copyright tellybest.com, 2022, 2023. All Rights Reserved. Unauthorized use and/or duplication of any material from tellybest.com without written permission is strictly prohibited.
Cached Saved on: Monday 21st of November 2022 05:19:01 PMCached Disp on: Friday 9th of December 2022 03:44:35 AM