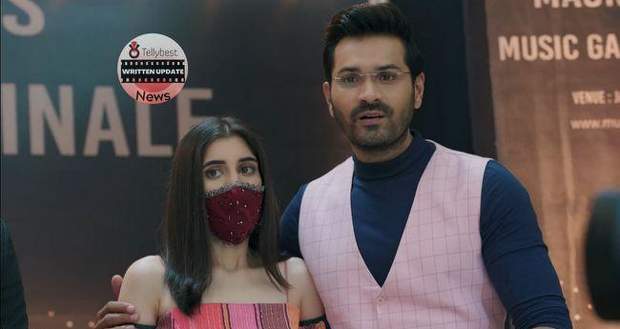 Meanwhile, Akshara is washing her wound in the bathroom and can’t hear the bell.

Before Abhimnayu breaks the door, Dr Kunaal calls out to him which surprises Abhimanyu.

Abhimanyu tells him to wait as there is a medical emergency but Dr Kunal lies to him telling him that he has taken care of the patient and sent her to the hospital.

He also invites Abhimanyu to his room to have a talk.

After a while, Akshara comes to check on the door thinking she might not have heard the bell but Abhimanyu is gone from there.

On the other hand, Kairav finds out about the police searching for him and panics.

In the meantime, Dr Kunal goes to help Akshara under the pretext of checking up on the receptionist.

Dr Kunal does not want Abhimanyu and Akshara to meet before the event and offers to dress up AKshara’s wound.

Meanwhile, Abhimanyu is feeling weird and thinks of asking Dr Kunal about Akshara who was the last person to meet her.

On the other hand, Akshara is dressing up her wound thinking about Abhimanyu.

Meanwhile, Kairav is thinking of using the tickets and Visa to return to India to escape Mauritius police.

In the meantime, Abhimanyu asks Dr Kunaal about Akshara telling him that a small clue to some information will help.

Later, Dr Kunal asks Abhimanyu his reasons for being in Jaipur.

Unaware of Dr Kunal's deceit, Abhimanyu tells him about performing surgery for her sister-in-law’s boss who is covering the music event.

However, Dr Kunal avoids telling Abhimanyu his reasons for being in Jaipur.

Abhimanyu takes his leave while Dr Kunal sees him going with the bated breadth to ensure his leaving.

Elsewhere, Manish calls Mahima to tell her that Mauritius police along with her will be hearing from his lawyer.

Mahima does not look overly bothered and looks questioningly at Aarohi who is working at Birla hospital without her family’s knowledge.

Just then Harshvardhan comes into Mahima’s room and questions Mahima for trusting Aarohi who has not told her family about her job with Birla hospital.

However, Mahima tells him never to trust anyone implicitly and only use weak links like Aarohi to get the work done.

Elsewhere, Abhimanyu’s weird feeling persists and he thinks of Akshara's promise of meeting him outside OT and then leaving without any trace.

© Copyright tellybest.com, 2020, 2021. All Rights Reserved. Unauthorized use and/or duplication of any material from tellybest.com without written permission is strictly prohibited.
Cached Saved on: Sunday 2nd of October 2022 07:29:10 AMCached Disp on: Wednesday 5th of October 2022 05:55:34 PM