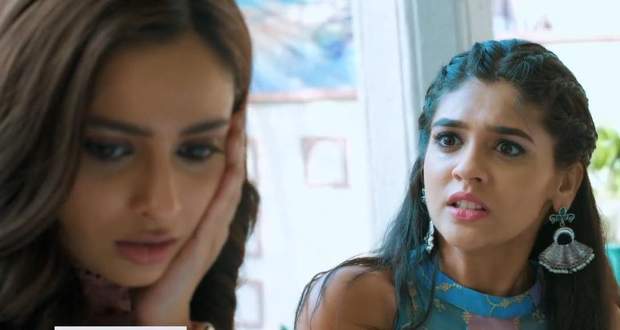 Akshara is very angry and tells Aarohi that she will definitely tell Abhimanyu and that too just now.

She leaves in her car while Aarohi follows behind trying to convince her to stop her.

Meanwhile, Abhimanyu gets a call from the investigator that he has got the footage.

Akshara reaches Abhimanyu’s house but no one is there.

Just then, she gets a call from Abhimanyu who asks her to come to the Hospital immediately which worries Akshara.

At the hospital, Akshara is surprised to see her family and Birla's gathered there and Neil tells her that Abhimanyu has asked them to come as he wants to show them something.

Soon they are called to the room.

Akshara is very tense thinking that Abhimanyu knows the truth and that she has been too late.

As Akshara enters with Aarohi, scared about what is coming next, she stops dead.

However, Abhimanyu is standing there smiling and moves from his place to show Akshara her own personal therapy room.

Abhimanyu praises Akshara’s music and tells everyone about the magic of Akshara’s voice that heals him and many others.

Akshara is deeply touched by Abhimanyu’s gesture and cries with gratitude.

While the Goenka family is pleased with this development, Harshvardhan and Mahima are feeling resentment toward Akshara.

Abhimanyu invites Manjari to inaugurate the department while Akshara hugs her and cries thinking of the accident.

Abhimanyu requests Manjari to sing something and Manjari sings a Bhajan.

Akshara is worried that her chance to tell Abhimanyu the truth is delayed.