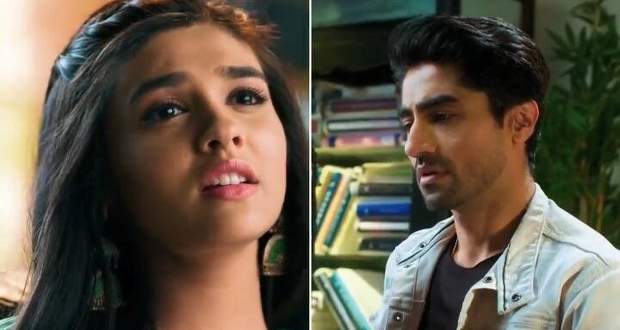 Today's Yeh Rishta Kya Kehlata Hai (YRKKH) 8 December 2021 episode starts with Manjari collapsing and Abhimanyu running to her in worry.
Abhimanyu puts Manjari on the sofa and rushes to bring the medical kit while Harshvardhan calls for the other family members.
Mahima injects Manjari with medicine and asks Abhimanyu the reason for stress that led to Manjari fainting suddenly.
Abhimanyu expresses his concern for Manjari and blames himself for her condition.
Meanwhile, in Goenka’s residence, Manish and Akhilesh talk about something being hidden among the members of the Birla family and Akshara hears them.
Abhimanyu sits on a puja in front of Manjari for her quick recovery along with the other family members.
Nishtha posts a story of the puja on her social media and Akshara sees it.
Akshara predicts that something is wrong with Manjari as she is not present in the video.
Manjari regains consciousness and all the family members sigh in relief.
Harshvardhan asks Abhimanyu to prepare for the health camp as Manjari’s health was stable.
Abhimanyu tries to refuse but Manjari convinces him somehow.
Later, Arohi gets to know that she and Abhimanyu wouldn’t be able to do the surgery together as Abhimanyu will be leaving for Shivir(camp) the next day.
She plans to go there and spend some time with Abhimanyu.
Akshara also plans to join Vansh the next day at the Shivir.
The next day, Manjari tells Abhimanyu to go to Shivir as scheduled and requests him to think about marriage, she tells him to think about Arohi despite knowing the fact that Abhimanyu loves Akshara.
Later, Arohi misses the car and decides to walk to the camp herself.
Abhimanyu was repairing his bike when Akshara falls on him and both have a moment.

© Copyright tellybest.com, 2020, 2021. All Rights Reserved. Unauthorized use and/or duplication of any material from tellybest.com without written permission is strictly prohibited.
Cached Saved on: Thursday 20th of January 2022 04:55:47 AM