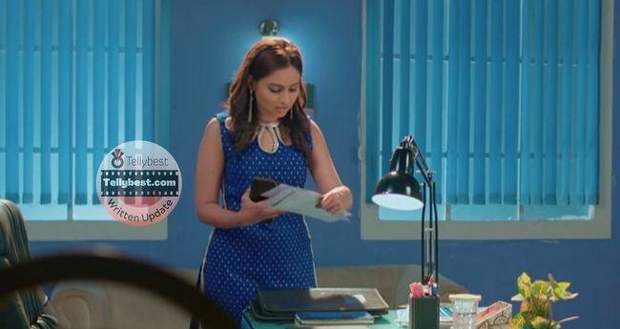 Abhi tells him that the procedure talks about reducing the risk to ninety per cent but there is ten per cent risk is still there.

He thanks Harshvardhan for the concern and tells everyone that he is not ready to take risks with Akshara’s life not even with as little risk percentage as .0000.

Akshara stops at the stairs to hear the discussion while Harshvardhan tells him that the decision to bring the child into the world is for both parents.

Later Akshara comes to Abhimanyu asking about the journal and tells him to consider the option.

However, he tells her that he cannot let their life into darkness in the hope of a ray of light.

Later, Akshara comes looking for LaatSahab when Abhimanyu comes to her, however, Akshara tells her that he is no more her Laat Sahab as that place is taken by someone else (referring to their child).

There is a child sitting on the bed and they both go to him and start to play with him.

Just then the alarm rings and Akshara wakes up and smiles realising that morning dreams often come true.

Meanwhile, Abhimanyu wakes up and wishes her the best of luck with her recording which takes away the smile from her face.

Later, Akshara goes to the recording studio hoping to see the song changed but seeing the same lyrics with Maa written all over her suffocates her and then the door gets stuck making her panic.

The moment, the music director opens the door she runs away from them in fear.

Later, the music director calls Abhimanyu and complains to him for not telling him about Akshara not being well and that she did not perform well today and yesterday.

Abhimanyu becomes worried and rushes outside in search of her.

On the other hand, Akshara feels dizzy after running so fast and falls unconscious on a tree stone.

Fortunately, Harshvardhan finds her there and takes her to the hospital.

Leaving Akshara with the doctors, Harshavardhan goes to make the payment.

Meanwhile, Aarohi is meeting her friend to collect the fake report while her friend warns her about the consequences.

Incidentally, Akshara is at the same hospital as Aarohi and sees her there while Aarohi remains unaware.

Elsewhere, Abhimanyu is calling Akshara’s number and getting worried about not having it connect.

Later, the doctor congratulates Akshara for being pregnant while Akshara remains stunned and asks her to reconfirm as she has complications that cannot make her conceive.

However, the doctor assures her and tells her that in light of her complications, she should be careful and take a lot of rest.

Harshvardhan overhears the doctor and feels happy at the news but also shows concern about Abhimanyu’s reaction.

He suggests Akshara consult the specialist the next day and then tell Abhimanyu about it.

However, Akshara is not ready to keep something so big from Abhimanyu.

She calls Abhimanyu who sounds worried and pelts her with question after question.

Hearing concern in his voice Akshara feels guilty and tells him to meet her at home and that she is with Harshvardhan.

At home, Akshara gets out of the car just when Abhimanyu also arrives there and bombards her with questions while Manjari also comes down asking after her.

Seeing the peacock feather in Abhimanyu's pocket, Akshara becomes happy and hopeful and decides to keep the news to herself for a while.