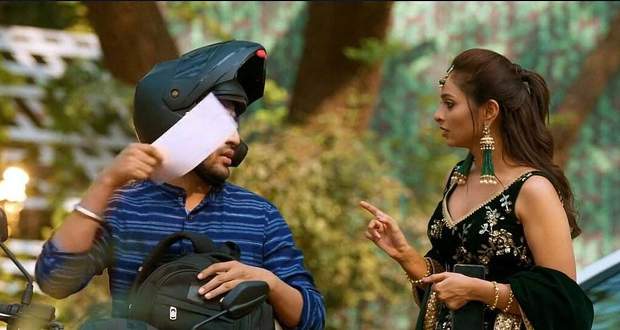 Arohi gets a call from the college and walks away to take it, Mahima notices and follows her.

Mahima asks what she was doing during such an important occasion of her marriage and drags Arohi back to the function.

The mehndi ceremony starts, Manjari announces their ritual of making the groom wear mehndi by the hands of his sister-in-law.

Akshara gets stunned on hearing the ritual but Abhimanyu at once agrees to let Akshara draw mehndi on his hand.

Akshara draws mehndi on both Arohi and Abhimanyu’s hands.

Everyone claps and Vansh announces the next game of the function.

Everyone has a box with them and Arohi has to find Abhimanyu’s stencil that will be used to imprint his face on Arohi’s hands.

All start the game with a dance, Arohi finds Abhimanyu’s stencil on her second try and comes to the stage with Akshara to put it in her hand.

Akshara proceeds to press the stencil on Arohi’s hand when she removes her hand to text the college staff, the face of Abhimanyu gets imprinted on Akshara’s hand.

Vansh notices the stencil lying on the ground and arranges to change it, Akshara hides her hand before anyone could see her mehndi.

Another game of couples starts, Arohi sneaks away telling Akshara who tries to stop her.

Neil follows her and sees her dealing with the staff for her seat in the university.

On the other hand, Abhimanyu catches Akshara struggling to erase his image from her hand.

He tells her she wanted them to act normal but she was hurting to even remove a mere mehndi from her hand.

Abhimanyu asks who he is to her other than her sister’s fiancé. Akshara hears him in silence.

Upcoming YRKKH episode updates: Akshara gets hit by a car and is brought to the Birla hospital, Abhimanyu gets shocked to see her lying in the OT covered in blood and injuries.

© Copyright tellybest.com, 2020, 2021. All Rights Reserved. Unauthorized use and/or duplication of any material from tellybest.com without written permission is strictly prohibited.
Cached Saved on: Wednesday 19th of January 2022 12:52:55 PM