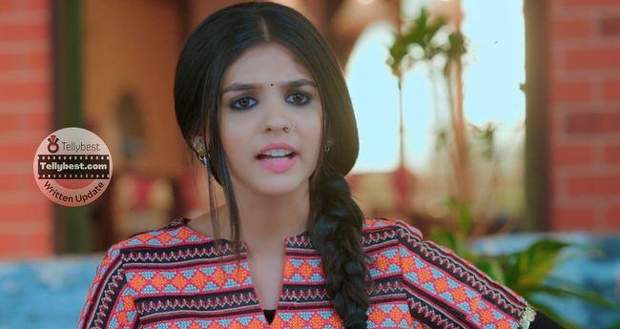 Meanwhile, Aarohi tells Manjari that she would not have been able to survive if Abhimanyu was not there to help her with Ruhi.

Just then Manjari gets triggered thinking of the past and scolds the staff unnecessarily.

After a while, Abhinav and Abheer returns from school with a gift in hand and announce their return.

Akshara guesses the gift is from Manish and tells Abheer to open the gift carefully so the paper is not wasted and they can reuse it.

Meanwhile, Abheer looks at the gift in anticipation hoping it is a gun or a skateboard.

However, Abheer is shocked to see a girl's dress in a box and wonders why Manish sent him this gift.

Later, Abhimanyu returns home with Ruhi when Aarohi tells her about the gift from Manish.

Ruhi and Abhimanyu attack the gift but are shocked to see the boy's coat in the gift.

Meanwhile, Manish gets a call from Abheer telling him that he has sent him a frock as a gift.

Just then Swarna also comes with a phone in hand telling him that he has sent Ruhi the wrong gift too.

Manish puts the phone in another ear where Ruhi is complaining to him about sending him a boy's coat.

Both the child asks him simultaneously if he has any other grandchild to whom he is sending gifts besides him/her.

Manish apologises to them while they question him if they will wear this dress to school.

Manish chides them saying they do not wear these dresses to school as they have their school uniforms.

Manish once again apologises to them while Abhimanyu takes the phone from Ruhi telling Manish to not worry and he will handle Ruhi.

Abhimanyu’s sentences get mixed while talking about Akshara’s child and he cuts the call.

In the meantime, Akshara also calls Manish and asks Manish about Ruhi becoming cute like her while Manish tells her that Ruhi is even cuter like him.

Afterwards, he tells her to come home as they all want to see her with them while Akshara tells him that for her the distance is too great to cover.

Later, Abhimanyu decides to tell Ruhi about Manish's other grandchild and tells her that he is a boy and lives far away from them.

Ruhi tells him that it is good that he lives far away as she is not ready to share her Poppy, Yo Matashri, and Nanu with anyone and also she hates boys.

Later, Manjari gets another attack while Mahima comes there asking for the reason.

Hearing about Abhimanyu’s stupidity, Mahima chides him and warns him that if this happens again then he will lose his mother.

Afterwards, Abhimanyu walks in the middle of the road thinking about the gift and Manish's warning when he encounters the Shiv Bhakts and refuses to take Shiv’s blessings saying he no longer believes in Mahadev.

Elsewhere, Akshara, Abhinav and Abheer are stargazing in the night while Abhinav tells Abheer that he has heard that everyone’s fate is written in stars.

Abheer asks him to read it while Abhinav tells him that God’s handwriting is very difficult to read.

Both Akshara and Abheer laugh at Abhinav while Akshara tells him that even if could read it then too he will not be able to change it.

Abhinav tells him that modern songs have no class or lyrics worth singing and begins to sing old songs.

Afterwards, Abheer teases Abhinav for poor singing and invites Akshara to join them but she excuses herself.

Later, Akshara and Abhinav settle sleeping Abheer on the bed while Akshara separates her bed from his.

© Copyright tellybest.com, 2022, 2023. All Rights Reserved. Unauthorized use and/or duplication of any material from tellybest.com without written permission is strictly prohibited.
Cached Saved on: Wednesday 25th of January 2023 09:48:54 AMCached Disp on: Sunday 5th of February 2023 03:35:28 AM