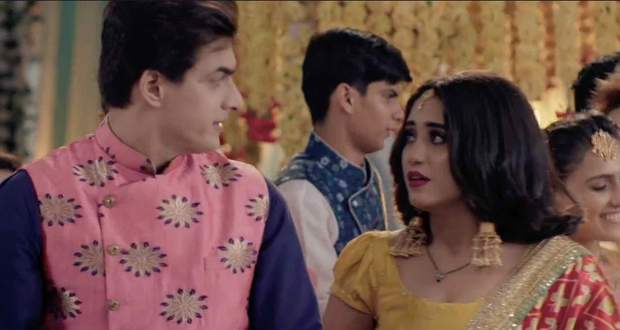 Chauhan gets pictures clicked while Sirat goes away and has a breakdown.

Kartik goes after her while Chauhan locks them but opens it after a while as their pictures get taken.

Later, Sirat sees Ranbir unconscious on the table they were sitting at and gets scared while he wakes up and says that he was just sleeping.

He calms her and talks about her bond with the Goenka's.

Elsewhere, Chauhan gets happy seeing Kartik and Sirat's pictures and thinks that the sponsors will back down after watching these on the news.

The next day, Kartik introduces Ranvir and Sirat to their new sponsors as they realize that the sponsor is Orthodox.

Everyone dances and celebrates the Haldi ceremony while the sponsor admires Sirat and Ranvir's pair.

Later, Kartik wonders why the projector is not working while Chauhan's side tries to project Sirat and Kartik's pictures.

Kartik wonders what is happening with the projector and decides to look at all the connecting wires but he bumps into Sirat.