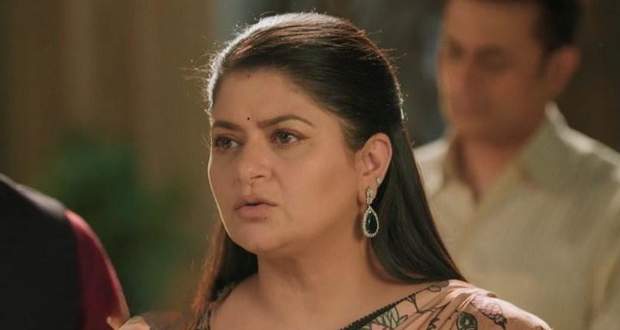 Abhimanyu goes to ask Manjari if she is fasting for Harshvardhan.

Manjari feels guilty and tells Abhimanyu that fasting is like a habit to her.

Abhimanyu tells Manjari that Harshvardhan needs to realise his mistakes.

Akshara also tells Manjari that there is no need to do anything due to the pressure of society and family but do what makes her happy.

Just then Mahima calls Manjari and she goes away.

Abhimanyu is frustrated at Manjari for keeping Harshvardhan on the pedestal and always praying him.

Akshara tries to explain to Abhimanyu that the heart does not operate on sense and where Manjari is standing it will take many small steps to detach herself from Harshvardhan.

Akshara tells Abhimanyu to go and rest while she looks after the household work.

Abhimanyu tries to stop Akshara and gets romantic with her while Akshara pushes him away and goes her way.

Later, Manjari presents Akshara with a box of Sindoor (vermillion) and tells her that it is a colour of love.

After a while, Anand and Parth come to Mahima and Shefali and thank them for fasting for them and tells them to not torture themselves and drink some juice if they feel hungry and express their love for their wives.

Meanwhile, Neil explains the renovation work that has been done at the hospital while everyone praises his efforts for doing so much in little time.

Neil tells them that he had help from Harshvardhan and that he needs to go back to the hospital to take care of million other things.

After a while, Akshara is feeling hungry while Abhimanyu encourages her to eat but Akshara tells him that she is doing it for love and him.

Meanwhile, Manjari calls Akshara to apply Mehndi on her palms.

Abhimanyu offers to apply Mehndi on Shefali's palm but his hand does not work properly which makes him worried.

Meanwhile, Harshvardhan asks Manjari to come back to the room and apologise to him for her mistake.

Manjari is surprised at the audacity of Harshvardhan and wonders if Abhimanyu is right.

In the meantime, Abhimanyu And Akshara present each other with beautiful gifts.

After getting ready, Akshara passes the Sindoor to Abhimanyu to fill it on her hairline and they rejoice in each other company before going down.

© Copyright tellybest.com, 2020, 2021. All Rights Reserved. Unauthorized use and/or duplication of any material from tellybest.com without written permission is strictly prohibited.
Cached Saved on: Monday 8th of August 2022 04:38:14 PMCached Disp on: Sunday 14th of August 2022 12:59:51 AM