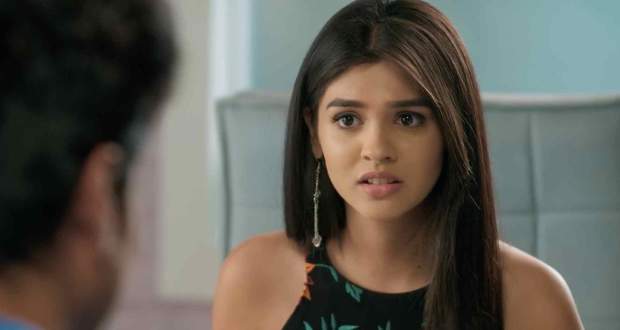 Seeing Akshara goofing around, Abhimanyu hangs up her call with his heart wiggling in excitement.

Meanwhile, Manjari tries to convince Harshvardhan to attend his son’s tilak but Harshvardhan shuns Manjari’s request at once making her cry in distress.

The next day arrives, Akshara was drying her hair when she suddenly notices a short circuit in the hairdryer and throws it in fear.

Considering this as a bad omen, Akshara tells herself that something bad is going to happen for sure.

At the same time, the Birlas groom up for the function of tilak with Abhimanyu coming down dressed as a stunning prince.

Seeing Abhimanyu, Harshvardhan too admires his son’s handsomeness and compliments him in his heart.

On the other hand, Akshara throws a tantrum blaming Arohi for not doing her eyebrows properly.

As Swarna, Suhasini, Akshara, and Arohi share a hug, the men appear and announce that they will prepare Akshara and bring her downstairs.

The chaos intensifies as Manish and Akhil struggle with lipstick shades while Kairav and Vansh put different nail polishes on each foot of Akshara.

Fed up by the clumsiness of the men, Akshara commands them to stand still while she completes her makeup herself.

While the men stand straight on command, Akshara finishes her makeup and swirls her attire making the men admire their princess.

On the other hand, Abhimanyu asks Harshvardhan lovingly to come with them to attend the function but Harshvardhan refuses.

As Abhimanyu was about to leave, Manjari announces that she will not attend the tilak function if her husband is not going.

Seeing Manjari refusing, Abhimanyu declares that he will not go to his tilak and asks Anand to inform the Goenkas.

Later, the Goenkas wait eagerly for the arrival of the Birlas while Akshara tenses up at the balcony.

Anand and Parth arrive delivering the news of Abhimanyu not coming when Manjari and others appear with Abhimanyu gleaming with excitement.