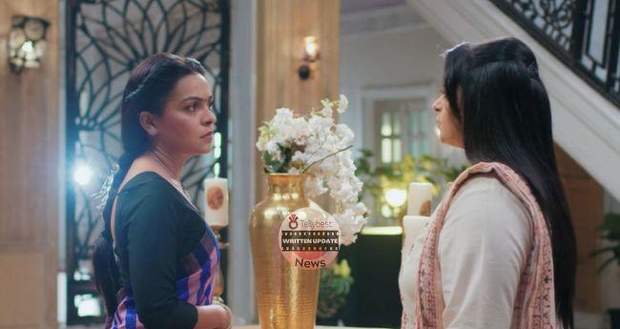 After getting everyone's blessings and best wishes, Abhimanyu and Akshara turn to Mahima.

Meanwhile, Akshara hugs Mahima and tells her that it is definitely not easy to let go but it is important to move on or else she will not be able to live peacefully.

She also tells her to take all the time and come out of the guilt and pain that is eating her alive from the inside.

Anand also tells Mahima to not let Anisha’s death be a bone of contention and not lose other relations in their life.

After a while, Manjari asks Abhimanyu and Akshara to go to their room.

Meanwhile, Akshara tells Abhimanyu to make a new entry into the room as they are restarting their life.

Meanwhile, Nishtha and Shefali decide to decorate AbhiRa’s palm prints on the wall while Manjari thinks that Akshara needs lessons in devoting herself completely to this relationship.

Later, Akshara stands on Abhimanyu’s feet and together they enter the room.

Afterwards, Abhimanyu shows Akshara the room and how he has made space for her.

Akshara is pleased and tells Abhimanyu playfully that she is aware that he loves her more than she loves him.

Manjari who has brought sweets for them feels weird at Akshara’s declaration.

Coming to them, she tells both of them that with this new beginning there are no chances of mistakes and if there will be any mistakes then it will be because of them and not their situations.

Later, she warns Akshara to never let a tear come to Abhimanyu’s eyes for she will not be able to bear it.

After a while, Harshvardhan questions Manjari for not saying the same thing to Abhimanyu.

Manjari defends herself and tells him that Abhimanyu has seen his share of grief and that Abhimanyu loves Akshara so much and will never hurt Akshara.

Manjari also tells him that Abhimanyu is more invested in this relationship and is likely to get more hurt due to Akshara which she does not want.

At the Goenka house, Swarna and Suhasini are talking about Akshara and her new beginning.

Meanwhile, Suhasini tells Swarna that Aarohi and Akshara do not deserve to be in the same house as they will not be happy together.

Meanwhile, Aarohi overhears Swarna and Suhasini and resolves to get back to Birla's house and hospital.

The next morning, Akshara watches the sleeping Abhimanyu and teases him to wake up.

However, Abhimanyu is in deep sleep and turns to the other side brushing off Akshara’s hand.

Afterwards, Akshara opens the window filling the room with sunlight.

Abhimanyu looks at the sources with shut eyes but his eyes grew wide open seeing Akshara standing at the window looking fresh and beautiful.

Abhimanyu spreads his hand as an invitation to come close but Akshara teases him and stood there.

Later, Abhimanyu hops out of bed and reaches Akshara and jumps back on the bed while enclosing Akshara in his arms.