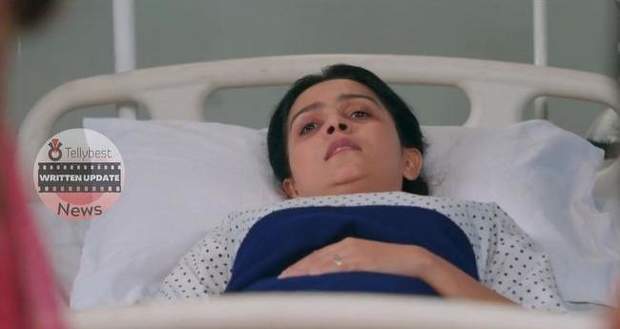 Today's Yeh Rishta Kya Kehlata Hai (YRKKH) 8th October 2022 episode starts with Abhimanyu and Nishtha telling the family members that they will be going to the Garbha nights.

Abhimanyu tells them all to give their tension a rest and enjoy the night for Nishtha’s sake.

At the dandiya party, Birlas arrive at the party and feels happy at the change.

Meanwhile, Goenkas are also at the Dandiya party where Akshara is all set to begin her career.

Goenkas encourages Akshara to sing with a full heart and give her best.

Akshara recalls the critical comment of the composer when the host announces to the introduction of the singers who will be giving live performances.

Just then Shefali recalls forgetting Shivu’s bag in the car and Abhimanyu goes to fetch it.

Meanwhile, the host introduces Akshara to the audience.

Birlas who were unaware of Goenkas' presence become shocked to see them while Goenkas looks at them in disgust.

Just then, someone asks Mahima about Akshara being their daughter-in-law.

After a while, the women gathered around begins to preach to Akshara about the divorce.

On the other hand, Abhimanyu also comes across some acquaintances and they begin to preach to Abhimanyu.

At the same time, Abhimanyu also tells those acquaintances to not make fun of the divorce nor take it lightly as it is equally painful for both girls and boys.

He also suggests to them various other topics for discussion that need their attention.

Meanwhile, Mahima mocks Akshara’s presence at the party and tells her that she does not look least affected by the divorce.

Suhasini tells Mahima to not exhibit her limited thinking and could not recognise the grief of a person if one is not crying.

Later, Shefali intervenes and asks Mahima to drop the subject while Suhasini also takes Akshara away.

After a while, Abhimanyu returns with the bag and finds Akshara’s earring attached to it and takes it off.

On the other hand, Aarohi and Neil exchange gifts with each other for the anniversary of their first date.

Just then Vansh timely warns them of Abhimanyu's arrival and saves them from being discovered.

Later, Vansh tells Aarohi to not continue with their relationship but AArohi is not ready to make a sacrifice like Akshara.

Afterwards, Abhimanyu and Akshara collide with each other and Abhimanyu balances Akshara in her arms.

Later, they get trapped under a curtain and keep losing each other in each other's eyes.

© Copyright tellybest.com, 2022, 2023. All Rights Reserved. Unauthorized use and/or duplication of any material from tellybest.com without written permission is strictly prohibited.
Cached Saved on: Monday 21st of November 2022 01:53:40 AMCached Disp on: Wednesday 7th of December 2022 03:13:43 PM