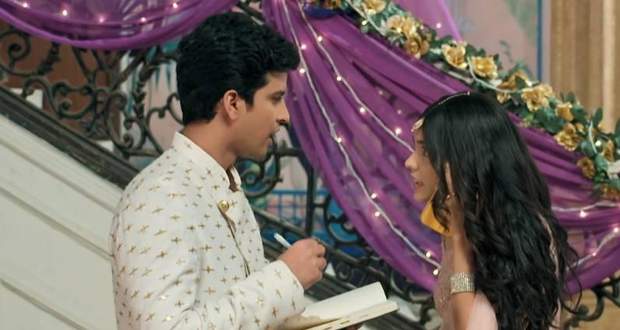 Akshara asks him to do the checkup today but Dr Miracle suggests that Abhimanyu will be fresh and rested tomorrow.

He also reminds them that the next day is Raksha Bandhan and he asks them to get done with it before coming to the hospital.

Goenkas also thanks Dr Miracle for taking the decision to help Abhimanyu and that he has revived their lost hope.

After a while, Abhimanyu and Akshara are enjoying a drink while he tells her how excited he is to return to his life as a surgeon.

Meanwhile, Manjari and Harshvardhan exchange words about Dr Miracle and resolve to fast for 108 days for Abhimanyu’s return to his normal self.

After a while, Akshara is walking in the corridor when she meets Anisha who asks Akshara to pray for Abhimanyu's health.

At night, Abhimanyu wakes up with a start and panics thinking if Dr Miracle does not give him the good news about his surgery or if things turn out to be different than they are thinking.

Akshara calms him down and tells him to think positive only.

The next morning, Akshara and Abhimanyu arrives at the hospital and enters Dr Miracle’s cabin.

Meanwhile, Akshara prays to God to get Abhimanyu better and she will sacrifice anything and everything for him.

After all the tests are done, Dr Miracle tells Abhimanyu that his chances of recovery are 99 per cent.

Abhimanyu, Akshara, Harshvardhan and Anand all become super happy to hear the news.

After a while, Dr Miracle tells Abhimanyu that he will do his surgery in four days and tells him to not take stress or feel over-excited during these days and take lots of rest.

On the other hand, Manjari shares the good news with Goenkas and Birlas.

At the same time, Anisha is getting phone calls which she keeps disconnecting.

Meanwhile, Akshara and Abhimanyu celebrate with each other with a cupcake.

After a while, at Goenka’s house, Anisha receives her wedding dress from a designer friend who has presumably messed up the order and sends a very short blouse with it.

Seeing the blouse, Suhasini gets angry at Anisha for ordering such a vulgar dress and calls her a brat who needs disciplining.

Meanwhile, at the hospital, Abhimanyu goes to get his phone while Akshara overhears someone talking to a girl name Anisha and telling her that he is badly bruised and is in the hospital.

© Copyright tellybest.com, 2022, 2023. All Rights Reserved. Unauthorized use and/or duplication of any material from tellybest.com without written permission is strictly prohibited.
Cached Saved on: Tuesday 22nd of November 2022 06:23:27 AMCached Disp on: Thursday 8th of December 2022 02:11:21 AM