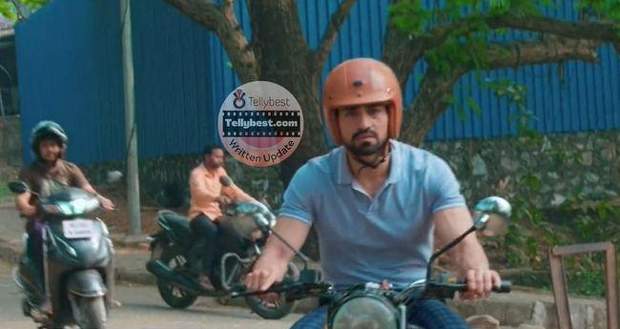 However, Akshara sees the peacock feather in Abhimanyu’s pocket as a sign and tells Abhimanyu that she needs to use the washroom.

Meanwhile, Harshvardhan tells Abhimanyu about Akshara being fine and needing to rest.

Just then Abhimanyu gets a call from the hospital and rushes there.

Meanwhile, Akshara washes her face in the bathroom and thinks of telling everything to Abhimanyu and that its God's wish too.

Later, Akshara comes down looking for Abhimanyu when Manjari tells her that Abhimanyu has to go to the hospital and tells her to rest in her room.

In the meantime, Neil is expressing her happiness to Aarohi on seeing the report and tells Aarohi about accompanying her in all the next check-ups from now on.

Aarohi looks puzzled and asks Neil if she can get treated at her friend’s hospital.

However, Neil refuses to entertain the idea and tells her that Birla hospital offers the best facility and she will get her treatment there only.

Meanwhile, Abhimanyu gets a call from Manish who tells her that the only thing that will make Akshara happy is the hope of becoming a mother.

Just then Abhimanyu gets the idea and tells Manish that he will call him later.

In the meantime, Akshara is preparing to tell Abhimanyu the good news.

Elsewhere, Abhimanyu is looking up orphanage sites hoping to adopt a child which has no risk and will fill their life with a child.

Meanwhile, Harshavardhan spots Manjari taking Kadha (concoction) for Akshara and tells her that it will not suit her in this condition.

Manjari looks shocked to hear Harshvardhan’s choice of words and asks him what is hiding and if her suspicion about Akshara being pregnant true.

Before Manjari can express herself, Abhimanyu arrives home asking for Akshara.

Abhimanyu looks surprised upon entering his room which is beautifully decorated when Akshara welcomes him with a bright smile and flowers.

Akshara makes Abhimanyu sit on the bed and talk in circles about life plans that surprise them when they least expect it.

She tells Abhimanyu to listen with his heart to what she is about to tell while Abhimanyu looks at Akshara in anticipation.

After a while, Akshara recites poetry about becoming pregnant which shocks Abhimanyu.

Meanwhile, Manjari is upset at the irony of fate that does not allow them to celebrate happiness completely.

She worries about the feelings of Abhimanyu and Akshara who will be finding it more difficult to face the news.

Meanwhile, Akshara tells Abhimanyu to take his time and not take any decision in hurry.

Abhimanyu panics at the thought of losing Akshara and asks her what to do.

Akshara helps him calm down and tells him that this is their life plan for them and they have no choice now as the situation has changed and they will have to adjust their perception.

However, Abhimanyu apologises to his baby and Akshara and tells her that he cannot take any risk with her life and they will have to let go of the child.

Akshara is shocked and tries to convince him but he remains adamant.

Manjari overhears their conversation and worries about them.

On the other hand, Aarohi is stressing about getting a checkup at Birla hospital and collides with Akshara who shouts at her for not paying attention.

Realising that Aarohi is pregnant too, she apologises to her and walks away with her hand on her stomach.

© Copyright tellybest.com, 2022, 2023. All Rights Reserved. Unauthorized use and/or duplication of any material from tellybest.com without written permission is strictly prohibited.
Cached Saved on: Wednesday 25th of January 2023 03:59:19 PMCached Disp on: Monday 6th of February 2023 02:33:47 AM