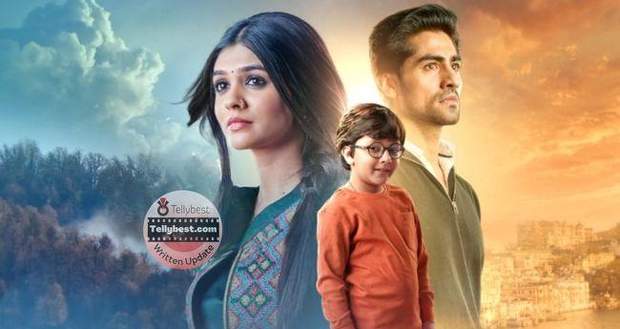 Later, she finds a saree hidden behind the temple and looks at Abhinav angrily.

Abhinav who has just woken tries to hide the price of the Sari but Akshara’s stares have him confessing.

On being scolded by Akshara, Abhinav tells her that she only has two sarees to wear to every function for so many years and deserves one.

Akshara tells him that with mounting expenses she could do without a Saree just like he is doing without a proper shoe.

Akshara feels bad for Abhinav and tells him to not feel guilty and goes to talk to Abheer.

Meanwhile, Mahima is conducting a board meeting at the hospital and tells Abhimanyu and Rohan to attend a conference in Shimla.

Abhimanyu refuses to go saying he cannot leave Ruhi alone but Aarohi assures her that she will manage.

Later, Mahima gets furious seeing Ruhi’s artwork on one of her files and tells Aarohi and Abhimanyu to keep Ruhi in check.

After a while, Shefali and Manjari come to the hospital for regular checkups.

Aarohi observes a swelling on Shefali’s face and questions about it.

However, Mahima calls Shefali at that instant and tells her to hide her injuries more properly.

Elsewhere, Akshara comes to Abheer with a cup of ice cream and a superhero story.

Abheer mocks Akshara for calling Abhinav a superhero who neither has abs nor wears underwear over his pant than how come he is a superhero?

Akshara tells him the story of his birth when Abhinav carried Akshara on his back and climbed a high mountain, on a dark stormy night, to get her to the hospital.

Akshara tells him about the decision he made to save them both.

Abhinav told the doctor to save Akshara’s child or else she will not be able to live and he stood in front of God for the first time and prayed for Akshara and her child.

Akshara tells Abheer that he was absolutely blue after birth and the nurse had no hope of the child lasting the night.

Abheer tells Akshara that he is a very strong child and the nurse must have some misunderstanding.

However, Akshara tells Abheer that he is strong now because of his father who has taken it upon himself to save him and make him strong.

After four days of constant care, Abheer survived and the rest is history.

Akshara tells Abheer to never say ever to his father that he cannot do anything for him.

Akshara tells him that Abhinav is a real superhero because his strength is his goodness.

© Copyright tellybest.com, 2022, 2023. All Rights Reserved. Unauthorized use and/or duplication of any material from tellybest.com without written permission is strictly prohibited.
Cached Saved on: Wednesday 25th of January 2023 11:27:56 AMCached Disp on: Sunday 5th of February 2023 04:00:11 AM