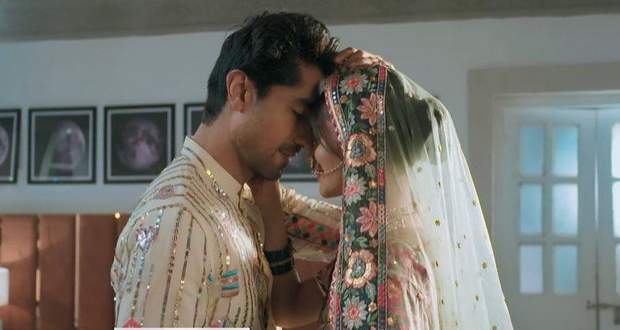 While dancing Abhimanyu's hands slip and Akshara falls down.

After a while, Akshara offers Abhimanyu sweets to cheer him up while Abhimanyu refuses to eat.

Abhimanyu’s refusal makes Akshara suspicious and she questions him if he is also fasting for her.

Being caught, Abhimanyu accepts that he is fasting for her.

Akshara’s eyes water and she thanks Abhimanyu for the honour he bestowed upon her.

Abhimanyu tells her that there is nothing to thank as he loves her equally and wants to do something for her just like she does. He also tells her that they are partners so she should stop treating him like God.

Later, Shefali tells everyone that the moon has been sighted and they all go out to perform the veneration.

Swarna asks Abhimanyu and Akshara to begin as it is their first Teej after marriage.

When Abhimanyu also picks a veneration plate, everyone becomes curious and asks him if he has also kept the fast for Akshara.

Akshara nods in agreement and Abhimanyu gets praised for loving Akshara enough to fast for her.

Among the comments and smiles of family members, AbhiRa breaks their fast and eats the holy sweets.

Seeing Akshara and Abhimanyu having their fill makes everyone laugh and Neil goes to record the moment.

Afterwards, other women also break their fast while Manjari stands aside in silence.

Just then Harshvardhan comes down and asks Manjari why has she not called him despite the moon sighting.

Manjari remains silent while others get awkward seeing Harshvardhan’s rude behaviour toward Manjari.

Harshvardhan once again addresses Manjari to get done with veneration so he can go.

Manjari goes to stand beside the table with veneration plates and stands quietly.

Harshvardhan comes to her and tells her to hurry.

Manjari takes a bite of the holy sweets which shocks Harshvardhan and others.

Manjari tells Harshvardhan that she could not bring herself to fast for him this year as she feels empty from the inside.

Harshvardhan calls it a drama while Abhimanyu explains to him angrily that these customs and rituals become useless when one has no feeling for the other in the heart.

He also tells him that in a marriage emotions have to be two-sided to keep the relationship going.

© Copyright tellybest.com, 2020, 2021. All Rights Reserved. Unauthorized use and/or duplication of any material from tellybest.com without written permission is strictly prohibited.
Cached Saved on: Tuesday 9th of August 2022 02:26:31 AMCached Disp on: Saturday 13th of August 2022 11:19:38 PM