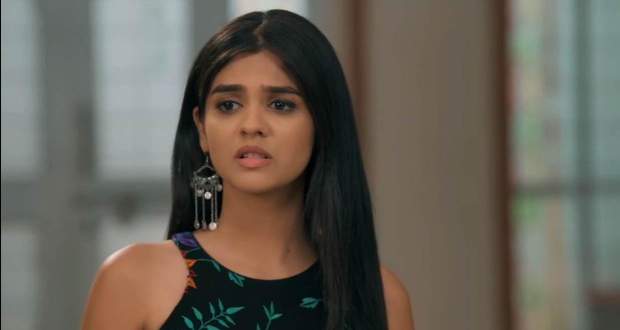 Akshara hides behind Arohi as Abhimanyu tries to spot her while entering the house.

Flashback starts with Harshvardhan telling Manjari that the tension is between him and Abhimanyu so she does not need to restrain herself.

He allows Manjari to attend the function with Abhimanyu and the others.

As Abhimanyu was about to enter the house, Arohi stops him in his tracks, denying entry to the Birlas.

She announces that today she is just Arohi who will not allow Abhimanyu to enter the house.

Abhimanyu gets agitated with irritation but realizes it is all a joke when Suhasini and Manish reveal that it is Arohi’s right to do that.

On asking Arohi what he needs to do, Arohi asks Abhimanyu to tell how many jaggery sweets are there on the plate after giving him a mere glance.

All start to boo him as Abhimanyu steps back from Arohi thinking he has given up but he shocks everyone by jumping over Arohi and entering the house in one go.

Manjari seems to be sad as Hashvardhan refused to join them, Akshara notices Abhimanyu wiping his mother’s tears and tries calling Harshvardhan but he does not pick up.

In an attempt to pick up her mobile, Akshara’s sleeve gets torn and she rushes back to the room while Abhimanyu tries to call her.

With Neil’s help, Abhimanyu comes upstairs and freezes in his spot in enchantment on seeing Akshara shining like a princess.

Dazed by Akshara’s beauty, Abhimanyu tells some filmy lines to Akshara and compares her with the beauty of the moon.

As Abhimanyu helps Akshara by sewing her dress, Akshara breathes heavily when Abhimanyu comes closer to her intensifying the heat of lust in them.

Akshara gets flustered by Abhimanyu’s intimacy and runs away from him after he asks for a reward for helping her.