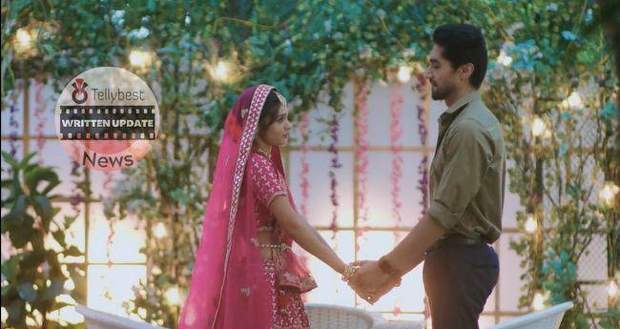 Today's Yeh Rishta Kya Kehlata Hai (YRKKH) 9th November 2022 episode starts with Abhimanyu receiving a call from Anand just when he is getting romantic with Akshara.

After a while, Anand makes an announcement about selecting a new Medical Director for Birla hospital.

Mahima assumes that it will be her name that Anand will be announcing at the Press conference and becomes happy.

Later, Nishtha and Parth present Mahima with flowers and cards thinking of her to be the next medical officer.

After a while, Akshara comes to Neil with food and tells him that very soon she will find a girl who will love her the way he deserves.

Neil feels relaxed after talking to Akshara while Abhimanyu prays to God to return their happiness as well.

In the meantime, Mahima is enjoying seeing the preparations for the announcement and thinks about her achievement and how she worked hard for it.

Just then, Aarohi comes to Mahima and asks her to not take away her position after becoming a medical director.

However, Mahima refuses to help Aarohi telling her that it will be in the best interest of everyone to keep Birlas and Goenkas apart.

Aarohi feels disappointed in Mahima and calls her selfish when Neil tells her that she is getting what she deserves.

In the meantime, Anand announces to the media that he and the Board of Directors have decided to grant the position of Medical Director to Abhimanyu Birla.

Mahima's hopes and ambitions shatter right in front of her while Abhimanyu tells Anand to consider Mahima for the post.

However, Anand insists and asks Mahima to put the badge on Abhimanyu.

Mahima feels shocked and upset at having to let go of the badge that she is hoping to wear and puts it on Abhimanyu.

After a while, Abhimanyu takes Akshara on stage to make a speech after being announced as the medical director.

Abhimanyu gives credit to Akshara for coming to this position and promises to do justice with it.

Meanwhile, Aarohi instigates Mahima against Akshara for being responsible for her not becoming a medical director.

After a while, Anand praises Abhimanyu to Mahima and tells her that he will take Birla hospital to new heights.

Mahima expresses her anger to Anand for not choosing her for the post.

Anand tells her that this is a small way of paying back Abhimanyu and Akshara for causing grief to them.

Shaming Mahima, Anand also tells her to learn from her mistake and not repeat it to harm others.

© Copyright tellybest.com, 2022, 2023. All Rights Reserved. Unauthorized use and/or duplication of any material from tellybest.com without written permission is strictly prohibited.
Cached Saved on: Monday 21st of November 2022 02:50:26 AMCached Disp on: Thursday 1st of December 2022 11:47:49 AM