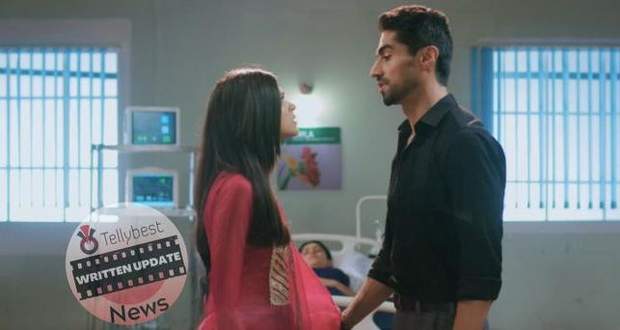 Akshara goes on the stage excitedly and freezes seeing Abhimanyu in front of her.

As Akshara is about to start singing, Abhimanyu stops her and goes to make an announcement about a free medical camp. However, he is only covering up to give Akshara time to adjust her dress which has come loose.

Akshara feels grateful to Abhimanyu but gets disappointed to see him put on noise-cancellation headphones afterwards.

Akhilesh sympathises with Akshara who keeps getting dragged down by Birlas.

Afterwards, Akshara tells the audience that on the eve of Dandiya eve, people with broken hearts should dance wholeheartedly along with happy couples.

Holding her head high, she also announces joining them in their dance while singing.

Meanwhile, Kairav is sad and talks to Manish about feeling his whole life like a prison where he will always be judged without knowing the truth.

However, Manish advises Kairav to not fear defeat and make a new beginning just like Akshara.

At the dandiya party, Akshara dances with everyone while teasing Abhimanyu into dancing.

Abhimanyu tolerates Akshara’s teasing for a while then change the song and takes the lead and starts to dance himself while challenging Akshara to tease him more.

The dandiya night which was supposed to be a fun night turns into a battleground with Abhimanyu and Akshara trying to show one-upmanship to the other.

Meanwhile, their families look worriedly at them.

In the last round of dance, Akshara and Abhimanyu forgets about their surrounding and keep dancing with fervour even after the music stops making a spectacle of themselves.

They only stop after sheer exhaustion.

After a while, Akshara and Abhimanyu cry in pain deciding to go far away from each other.

Late at night, Harsh calls Akshara and requests her to try music therapy on Manjari to bring Manjari out of the coma.

Akshara refuses Harsh’s request telling him that she cannot let one more blame upon herself as her good intentions are always questioned and she is proven guilty.

Meanwhile, Anand and Mahima are discussing sending Abhimanyu away from Udaipur so that he can move on.

The next morning, Manish makes breakfast for Akshara and proposes to re-open her mother’s dance academy.

Akshara gets excited at the prospect of re-opening the dance academy and invites Manish to join her and make a new beginning.

At the Birla house, Mahima and Anand tell Abhimanyu about opening a new branch in Mumbai and ask him to move to Mumbai to head the branch.

Mahima also suggests taking Manjari with him so that she can get better medical facilities in Mumbai.

Anand hands over the papers to Abhimanyu and tells him to stay away from Udaipur as it is good for his well-being.

© Copyright tellybest.com, 2022, 2023. All Rights Reserved. Unauthorized use and/or duplication of any material from tellybest.com without written permission is strictly prohibited.
Cached Saved on: Monday 21st of November 2022 01:55:20 AMCached Disp on: Tuesday 6th of December 2022 12:56:54 PM