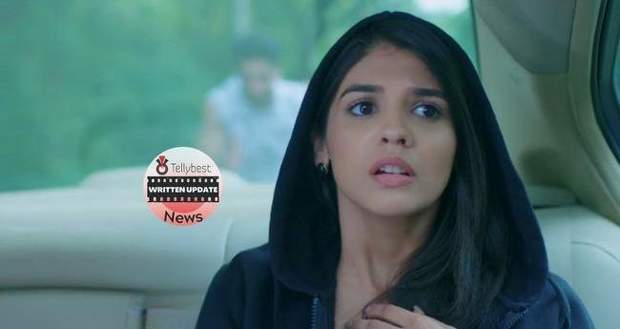 Today's Yeh Rishta Kya Kehlata Hai (YRKKH) 9th September 2022 episode starts with Abhimanyu standing outside the hotel when Manjari calls him to tell him that she has been praying for his peace of mind.

Meanwhile, Kairav is roaming the streets of Udaipur and switched off his phone.

On the other hand, Akshara is trying to contact Kairav and worries about not being able to reach him.

Sitting outside the hotel, Abhimanyu is wondering about Akshara changing her name as no one knows her by her real name.

After a while, Maaya excitedly tells Akshara to accompany her to meet her fans.

Abhimanyu joins the crowd to meet Akshara but is shocked to see Maaya.

Maaya is glowing with pleasure hearing the beautiful comments of her fans.

Later, Abhimanyu confronts Maaya and tells her that she has not sung this song and her voice does not match the singer's.

After a while, Akshara questions Maaya for looking sad and harassed despite the wonderful comments of her fans.

Maaya tells her about a fan who is talking weirdly and looking strangely at her but also praises the majestic pull of Abhimanyu's personality.

After a while, Abhimanyu calls Aarohi to ask if Akshara has returned or not and disconnects the phone as soon as Aarohi denies any knowledge about her.

Abhimanyu sits in the reception area and waits for Maaya to reappear to get to the bottom of the matter.

Meanwhile, Aarohi calls Mahima to inform her about Abhimanyu's first query in a year about Akshara.

In the meantime, Akshara is talking to the lawyer who tells her that he has some pictures that might help the case.

After a few hours, Maaya walks down to the reception alone.

Abhimanyu follows her unaware that Akshara is a few steps behind coming with Dr Kunal.

In the car, Dr Kunal talks to Akshara about giving her best as that will make him feel that his time and sacrifices are all paid off.

Akshara tells him that there is no sacrifice on his part as she is the one who gives her time and makes sacrifices.

She tells him that she has done it for Abhimanyu and since then she has been counting the days when she can go back to him.

After a while, Akshara begins to have a weird feeling that Abhimanyu is in danger.

Meanwhile, Abhimanyu’s bike skids on the road and spills oil.

Akshara begins to look around feeling Abhimanyu nearby.

Soon they arrive at the accident site and Akshara is horrified to see Abhimanyu lying helplessly on the roadside.

Akshara tries to get off but Dr Kunal makes every effort to stop her.

Akshara gets outrageous and slaps Dr Kunal hard for stopping her from going to Abhimanyu and threatens to destroy everything if he dares to stop her.

© Copyright tellybest.com, 2020, 2021. All Rights Reserved. Unauthorized use and/or duplication of any material from tellybest.com without written permission is strictly prohibited.
Cached Saved on: Saturday 1st of October 2022 10:13:15 PM