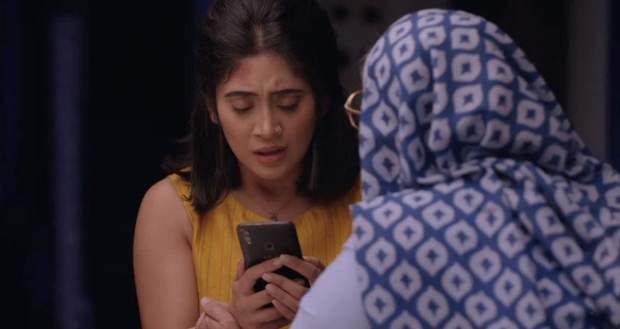 Sirat’s friend gets surprised, is not able to say anything, and tells Sirat to see the pic by herself.

Meanwhile, Sirat sees Kartik is not relaxed due to mosquitos and his own thoughts.

Sirat finds her internet to be slow and her phone also gets switched off.

Sheila comes along with neighbours to search for Kartik in Maudi's house.

Sirat and Maudi don't allow them to enter the home but Sheila says that Kartik is under the mosquito net but doesn't find anyone there.

Sirat thinks that Kartik went to his house at late night because he said that he has to go and wants to reach his home.

Sheila and Mukesh badmouth Sirat's character to which Maudi says that stepmothers are better than her.

On the other hand, Rhea is busy talking to her phone that Kartik is single, perfect for her and she wants no one else in her life while Suhasini passes by and sees Akshu crying.

Suhasini wonders what Akshu is doing on the kitchen shelf while Rhea gets up and says that she was feeling a headache and came to the kitchen to get a coffee.

Suhasini says that she will handle Akshu while Rhea thinks that her brain worked at the last moment for getting coffee otherwise it would have stumped her plan of getting married to Kartik.

Meanwhile, Sirat goes to get her phone to call the police, she sees Naira's picture on her phone, and she gets completely shocked.

Maudi sends Sheila, neighbours to their home and says to herself that she has got such a selfish daughter.

Maudi sees Sirat in a complete state of shock and asks her what happened to which Sirat shows her the picture of Naira.

© Copyright tellybest.com, 2020, 2021. All Rights Reserved. Unauthorized use and/or duplication of any material from tellybest.com without written permission is strictly prohibited.
Cached Saved on: Saturday 31st of July 2021 09:02:56 PMCached Disp on: Wednesday 4th of August 2021 05:28:08 AM