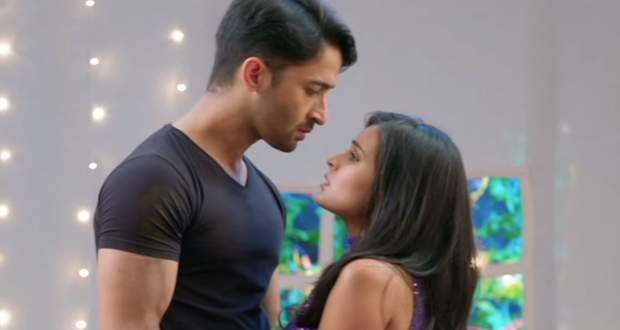 Today's YRHPK 10 Dec episode starts with Nishant enquiring about the material he asked for. Kuhu shows him the trunk full of traditional clothes while Abir also sees the contents.

Meanwhile, Meenakshi is planning to surprise Abir and asks the driver to take the car to Dhani resort. At the same time, Abir gets jealous of Mishti and Nishant and gets drunk.

Meenakshi reaches the Dhani resort while Abir and Mishti leave the party. Abir goes into the jungle and Mishti follows him.

He finds the tent and sword fight setting and asks Mishti to make new memories. Mishti says she never lived the memories and she is not affected by the past.

She calls him jealous and gets into a sword fight using wooden sticks. Mishti traps Abir between her and the tree and they share some romantic moments.

Abir pushes her away and says he is not jealous. Meanwhile, Kunal gets worried to see Meenakshi and tries to distract her.

Kuhu wants to know if Nishant has feelings for her. Nishant asks Kuhu to ask Mishti while Kunal tells Meenakshi that Kuhu is also there.

Mishti starts moving the branch of a flowering tree to shed flowers on Abir. Mishti wants Abir to accept that it affects him while Abir feeds her cake.

Later, he gets close to her and shares a special moment. At the same time, they hear Meenakshi’s voice and Abir gets away from her as he remembers why he left Mishti.