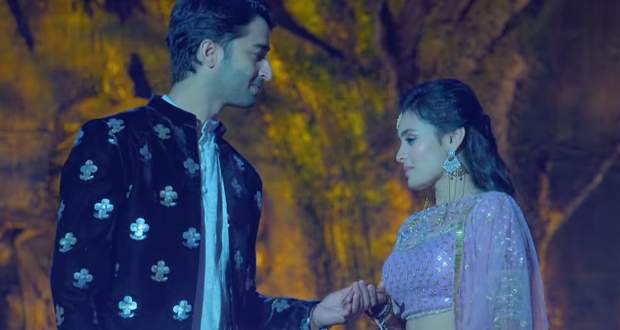 Today's YRHPK 10 Feb episode starts with Kuhu entering in a grand way for the Sangeet ceremony. She brings a challenge with her and asks Abir to blindfold.

He is asked to identify his Mishti from a group of girls. Abir passes the test and identifies Mishti. Mishti and Kuhu challenge Rajvanshs to beat their theme.

They reveal their theme as breakup and Abir and Mishti challenge each other. The Sangeet ceremony starts with a fun song wherein Kuhu, Mishti, Abir and Kunal perform along with the rest of the family.

Kunal tries to flirt with Kuhu while she ignores him. Meanwhile, Laxman is present at the ceremony in a servant’s costume. The Sangeet function resumes and Kuhu starts the dance.

Kunal and other Rajvanshs join in to challenge her moves. Later, Mishti starts her performance with Saathiya Mere song and Abir joins her.

They give a wonderful performance and also imagine spending some quality moments together. The whole family again joins to dance and enjoy the function.

Later, the chandelier is about to fall on Mishti when Abir saves her. They find Laxman disguised as the servant while Abir thinks Meenakshi has sent him to break the chandelier.

Rajshri says she kept the candle there while Meenakshi arrives and says she called Laxman. Kuhu gets upset as Kunal’s concentration shifts to Abir.

Upcoming Yeh Rishtey Hai Pyaar Ke episode update: Mishti is about to open Kuhu’s envelope when the latter snatches it from her hand.

© Copyright tellybest.com, 2018 & 2019. All Rights Reserved. Unauthorized use and/or duplication of this material without written permission from tellybest.com is strictly prohibited.
Cached Saved on: Monday 30th of March 2020 02:25:26 AM