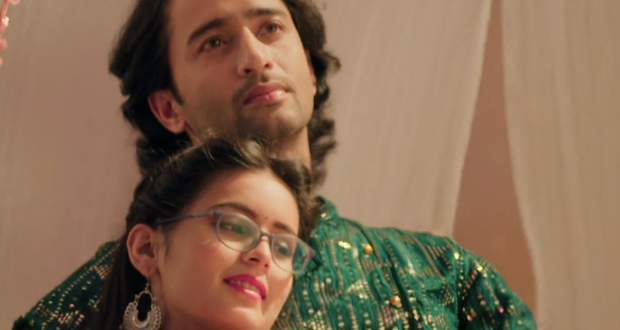 Today's YRHPK 10 Oct episode starts with Abir arriving at Maheshwari house and helping Mishti getting ready. They share some romantic moments while Abir puts on jewelry on Mishti.

Meanwhile, the Rajvansh family is all set to play dandiya while no one is happy with Mehul’s participation in the celebrations.

Meenakshi gets a call from someone who is standing right outside and wants his answer. He bumps into Mishti while later she challenges Abir to put a chain in front of everyone.

Abir takes advice from his father about dealing with Mishti’s challenge. Later, the dandiya night begins and Mishti apologizes to Naanu.

She also tries to talk to Meenakshi but is interrupted by Nishi. Everybody starts dancing and doing Dandiya to the beats of a popular song.

Abir gets delighted to see Mishti dancing with his father while later the same man comes inside and starts searching for Meenakshi.

The man is one of the villagers who came to beat Mehul and asks for his money. Meenakshi also talks over call and says she can’t talk at the moment.

Later, the winners of the competition are announced as Kuhu and Kunal. Kuhu starts searching for Kunal while Kunal is outside to meet his lawyer.