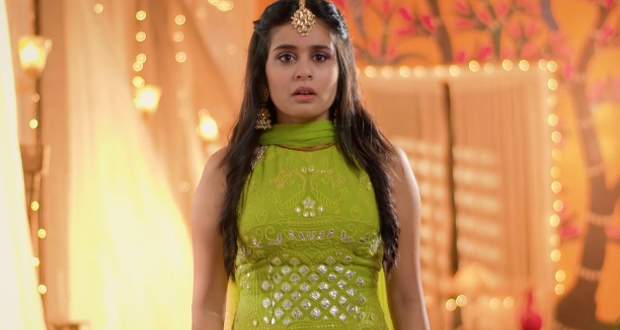 Today's YRHPK 11 Aug episode starts with Mishti getting happy to see her Bade Papa and Badi Maa. Meenakshi introduces them to Varun’s parents.

Varun again makes inappropriate jokes while Abir is able to understand his every word. The family further celebrates the Sangeet by dancing on a popular song.

When everyone is dancing, Varun and Abir go in private to talk. Mishti watches them going and follows them. Abir tries to explain Mishti’s situation while Varun wants Mishti to confess the truth.

Varun threatens to not marry Ketki if she doesn’t reveal the truth while Mishti overhears everything. Mishti is shocked to see Abir joining his hands in front of Varun and decides to tell the truth.

Mishti goes downstairs and wishes to speak something while Abir tries to cover up. Mishti reveals she is not sick and doesn’t even want to leave the house.

She explains her reactions to various things and says she has been struggling for 3 months. Mishti says she is not able to see Abir joining in front of anyone.

She further reveals that she has killed Varun’s brother Karan 3 months ago. Everyone gets shocked to hear the truth while Mishti is ready to accept any punishment for her mistake.

Nirmala speaks up and is adamant to get Mishti punishment. She gives 2 days' time to Meenakshi for Mishti to tell the truth in front of the police. Meenakshi, Vishambhar, and Rajshri are upset with Abir and Mishti hiding the truth.

Abir explains Mishti was blamed for everything in the house and he wasn’t able to speak the truth. Abir further reveals that Karan attacked Mishti and tried to take advantage of her.