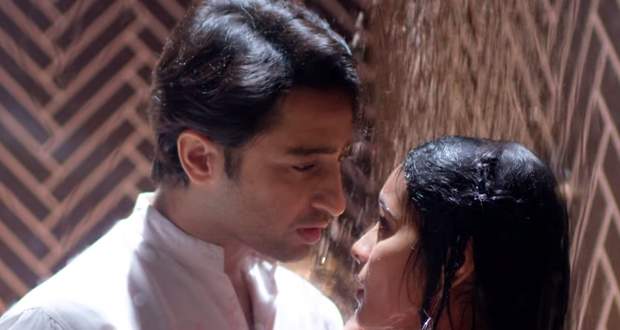 Kunal apologizes to Meenakshi while Mishti wishes to punish Kunal for apologizing on her sister’s behalf. Abir takes Mishti in their room while Kunal takes Kuhu along.

Abir takes Mishti in their bathroom and puts cold water on her. They get romantic while Abir says he has won the bet and asks for his prize. Mishti says she doesn’t remember anything and both get romantic under the shower.

Abir asks for the kiss while Mishti runs away. Meanwhile, Jasmeet and Nidhi fight for a Sharbat drink while Kuhu drinks it instead. Further, Kaushal brings green chilies and Kuhu and Jasmeet decide to compete.

Meenakshi plans to plant a bag in Kuhu’s room to create differences between Mishti and Kuhu. Abir and Mishti enter Kuhu’s room while Meenakshi hides behind a door.

Abir asks Meenakshi to not talk about the topic again. Abir assures the Maheshwari family that they are not blaming Kuhu. Elsewhere, Kuhu accuses Mishti of keeping the bottle in her room and admits she mixed the sleeping pills.

Abir overhears this and confronts Mishti. Mishti explains she didn’t want problems in the house and calls Kuhu selfish. Abir doesn’t want her to say anything and calls her a fuss creator as well. Mishti gets upset that Abir thinks she is a family breaker.

© Copyright tellybest.com, 2018 & 2019. All Rights Reserved. Unauthorized use and/or duplication of this material without written permission from tellybest.com is strictly prohibited.
Cached Saved on: Wednesday 8th of April 2020 06:48:20 AM