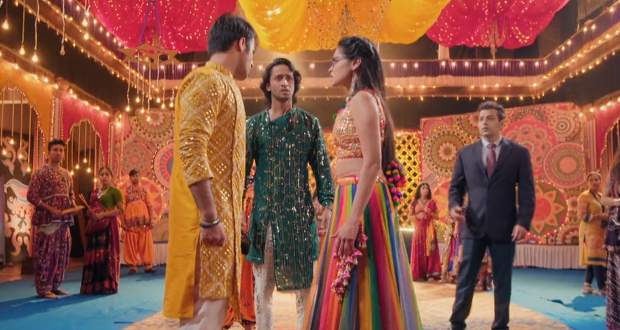 Today's YRHPK 11 Oct episode starts with Mishti and Abir sharing some romantic moments. They start dancing together while Kunal gets angry to see them together.

Kuhu comes out to show Kunal the trophy but is shocked to see him getting divorce papers from a lawyer. The trophy falls off from her hands while Kunal sees her.

Kunal gives the divorce papers to Kuhu and is confident Abir and Mishti will not get married. Later, Mishti finds Kuhu crying and enquires about her state.

Kuhu says Kunal is giving divorce to her to break her relation with Abir. She further says Kunal lied that he loves her.

Mishti also learns that Kunal had escaped from the wedding. Mishti gets angry with Kunal and takes Kuhu inside to confront him.

Mishti slaps Kunal while Abir gets shocked. She says Kuhu will herself leave him and tells Abir that Kunal has given divorce papers to her.

She further tells Abir that Kunal wants to break their relationship. Kunal also admits in front of Abir that he married forcefully because of his mother.

Abir sends Kunal home while Mishti tries to console Kuhu. Kuhu says she will take her own decisions and tells Mishti to not tell anyone.

Upcoming Yeh Rishtey Hai Pyaar Ke episode update: Mishti says she will not listen to anything from Abir until he accepts his brother is wrong.