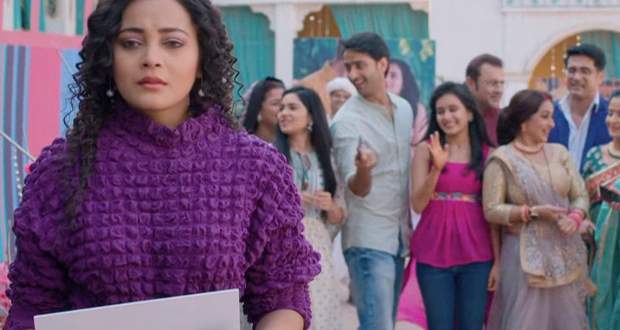 Today's YRHPK 12 Feb episode starts with Naanu coming to Maheshwari house to invite Mishti and her family. Later, Abir asks Mishti to go to his house.

Kunal gets upset when Kuhu says that she is busy. Meanwhile, Abir wants Mishti to cancel her plan with Naanu and come with her.

Kunal asks for some more time from the lawyer and tries to talk to Kuhu. He shows her the sports car while Maheshwaris arrive at the same time.

Mishti is surprised by a bus cut-out in which Ketki is sitting. They recall the first meeting of Abir and Mishti while later Abir shows some beautiful portraits.

Naanu further gives the traditional necklace to Mishti as she is the most special. Kuhu gets jealous of this while Abir senses Kuhu’s mood change.

Kuhu is asked to take the picture and is excluded from the family picture. She feels ignored while Mishti thinks the necklace is gifted by Meenakshi.

Varsha consoles Jasmeet and assures that Kunal is with Kuhu. Meanwhile, Meenakshi reveals that she turned mad while saving her family.

She promises Mishti that she won’t play any games or plan new things. Later, Kuhu gets mad at Kunal and packs all her stuff in the bag. Abir witnesses her leaving and says he will bring the bag.

He confronts Kunal and tells him he has heard everything.