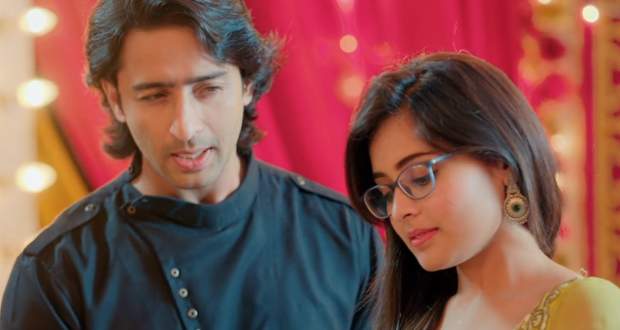 Today's YRHPK 12 Sep episode starts with Kunal getting enraged to see Abir and Mishti together. Meanwhile, Abir apologizes for making her uncomfortable while Mishti says sorry for being in his room.

Abir tells Mishti about his father and how they used to celebrate Ganesh Utsav. He gets emotional while missing his father. His emotional story brings tears in Mishti’s eyes. Mishti tells him to talk to Kunal as he has a hint of their relationship.

Kunal gets even angrier when he sees Mishti and Abir hugging each other. Later, Yashpal calls Meenakshi and enquires about her work.

Mishti plans a surprise for Abir in the form of showering flowers. She asks Abir to talk to Kunal while Kunal takes it otherwise.

Meenakshi learns that the person she has come to meet in the hospital has been discharged. Meanwhile, Mishti tries to shower flowers on Abir but fails.

Kunal apologizes to Kuhu and warns her to not take his words in the wrong sense. Later, Abir surprises Mishti with flowers petals and is himself hanging with a rope.

The rope gets lose and Kunal rushes to save his brother. He holds on to the rope and Abir gets down. Kunal gets mad at Mishti and calls her selfish.

He further tells her to leave his brother’s life. Abir wants Kunal to apologize to Mishti but Kunal leaves without saying anything.

Upcoming Yeh Rishtey Hai Pyaar Ke episode update: Kunal gives Abir a tough choice and wants him to choose either Mishti or him.