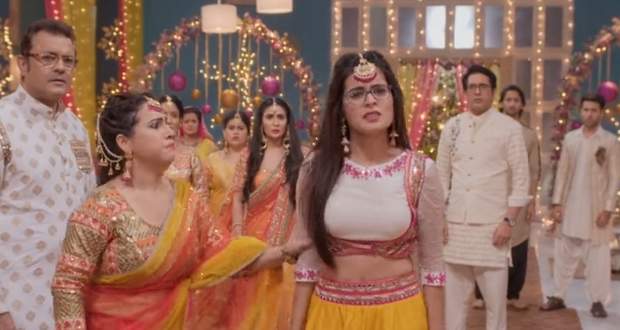 Today's YRHPK 13 Aug episode starts with Rajshri asking Mishti why she is not sleeping Kuhu and Ananya. She further asks what kind of boy she wants in her life.

Mishti starts asking questions about what Rajshri will do if she makes a mistake. Rajshri says she will get mad at her but will never let her go.

Meenakshi has made another plan and this time she is using Parul as well. Rajvanshs come to Maheshwari house for the Haldi ceremony.

Meanwhile, Mishti decides to provoke Kuhu and starts fighting with her. She further says Kunal was given as a favour to her and Varsha hears this conversation.

Mishti comes downstairs and Varsha follows her. She misbehaves with her in front of the whole family. She says it’s better to be an outsider rather than Kuhu who is an illegitimate child.

Varsha slaps her while everybody else is in shock. Abir wonders why Mishti is saying all this. Parul knows everything and still can’t say anything.

Mishti walks away but finds Kuhu’s friends on the doorway who are invited by Meenakshi.

Meenakshi enquires from Vishambhar about Mishti’s allegations. Shaurya tells he made a mistake and didn’t want his daughter to suffer.

© Copyright tellybest.com, 2018 & 2019. All Rights Reserved. Unauthorized use and/or duplication of this material without written permission from tellybest.com is strictly prohibited.
Cached Saved on: Sunday 7th of June 2020 01:41:58 AM