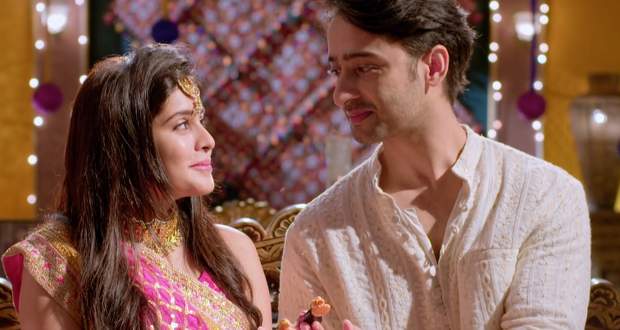 Today's YRHPK 13 Jul episode starts with Jugnu coming with parcels from NGO. Everyone in the family is preparing for some celebration and Abir misses Kunal.

At the same time, a pregnant Mishti arrives with Meenakshi looking really pretty. She sits on the swing along with Abir and receives a gift from Meenakshi.

The light goes off at the same time and Mishti and Abir are left alone. Mishti gets panicked and says she will reveal the truth in front of the family.

She reveals whatever she did was not on purpose 3 months ago and was a mistake. Abir tries to calm her and at the same time, Mishti wakes up from the nightmare.

Mishti runs towards the washroom while Abir asks her to forget about everything. Mishti blames herself for spoiling everything and keeping him away from his family.

Abir tries to calm her by reminding her past memories. Mishti opens the door and faces Abir. She knows Abir is staying away from his family because of her.

Meanwhile, Kuhu is upset with Kunal being busy all the time and jealous of Mishti going away for a honeymoon for 3 months. She further gets upset with Parul not following her breakfast routine and preparing the wrong items.

Meenakshi is playing Sitar and is upset with Abir staying away. Ketki wants to tell Abir about her alliance getting fixed. Nidhi doesn’t want her to tell Abir and also taunts about Abir choosing Mishti over the family.

Kaushal reveals that lockdown is over and Abir-Mishti can arrive soon. Abir wants to go home but is scared about Mishti. Mishti packs their clothes and says they need to go home as it is Meenakshi’s birthday.

Abir receives a call from his family and at the same time sees Mishti crying. He tells Meenakshi that they can’t return home. Meenakshi thinks Abir has decided to stay away from family.