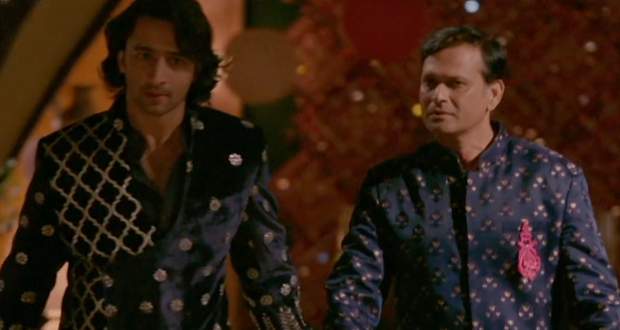 Today's YRHPK 13 Nov episode starts with Meenakshi declaring Mehul has to go to the police station. Mehul is not afraid of Meenakshi but instead threatens to kill her.

At the same time, Kunal receives a call from Meenakshi and learns Mehul is threatening to kill her. Mishti tries to tell Abir while at the same time Kunal asks Abir to come along with him.

Mehul removes all the photographs of Mishti while Meenakshi is sure Abir and Kunal will arrive. Meanwhile, Kunal tells Abir about Mehul being a threat while Abir is not ready to believe him.

Mehul threatens to reveal that Abir and Kunal are not real brothers. Meenakshi threatens to kill Mehul and at the same time, Abir arrives.

Mehul plays his trick and tries to trap Meenakshi in false accusations. He says Meenakshi was giving him property in return of being with Abir.

Mishti reveals Mehul’s truth in front of her family and Rajshri wants her to be with Abir in that hard time. Vishambhar promises Mishti that he will support her and Abir always.

Abir misunderstands Meenakshi and thinks she is trapping Mehul in her plan. He reads the papers stating that Mehul is breaking all ties with Abir.

Mehul traps Meenakshi in his game and puts all the blame on her of scams and frauds. Meenakshi asks Abir to enquire from Mishti while Abir doesn’t believe her and takes Mehul along.

Everybody at Rajvansh house tries to stop Abir but he leaves anyway.