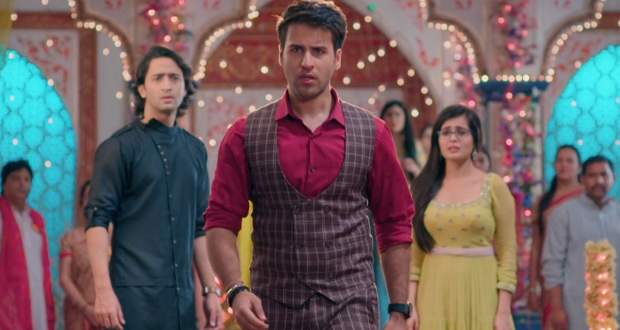 Today's YRHPK 13 Sep episode starts with Kunal getting angry and deciding to leave the pandal. Kuhu tries to pacify him but he is adamant to hate Mishti.

Further, Abir comes to console him while Kunal says Mishti is trying to steal him away. Kunal agrees to apologize if Abir chooses between Mishti and him.

Abir says Mishti is his love and not an object. He further blames Kunal for not understanding the true meaning of love.

Kunal gets upset and deduces Abir has chosen Mishti. Meanwhile, Meenakshi’s feet get hurt and she feels an unusual fear inside.

Abir tries to be cheerful and decides to do the Visarjan with a smiling face. At the same time, Kunal is upset about losing his brother.

Kuhu tries to console him and later he hugs her. Meanwhile, Abir and Mishti wonder if their relationship will be accepted by their family.

Abir says Kunal is influenced by their mother and that their father always had a solution. Mishti wishes to search for his father.

Abir says he doesn’t even remember his father’s face but still agrees to try searching for him. At the same time, Meenakshi is really upset with her kids getting away.

Meenakshi tells Yashpal about someone returning back and being in Mumbai. Later, Kuhu tells Meenakshi that Abir and Kunal had a fight in Mumbai.